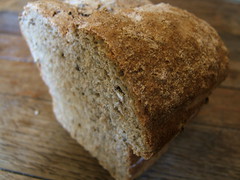 I wanted to buy some bread the other day. I sometimes make my own, but on this particular day I was tired and I just wanted to grab some plain brown bread at the store and go home and eat it without all the fuss of flour and baking tins and what have you. And so I found myself standing in front of the shelves of bread at the supermarket...

I know the supermarket isn’t the best place to buy bread, and I know that pre-packaged bread in particular leaves a lot to be desired. But really, when I looked at the lists of ingredients in what were ostensibly just loaves of plain brown bread, I was shocked.

All you need to make bread is flour, water, yeast and salt. Obviously more things need to be added if the bread is going to be mass-produced, wrapped in plastic and shipped off to a store where it will sit sweating on a shelf for days on end, so I’m not particularly taken aback when I see ingredients like “citric acid” in wholemeal bread from a supermarket.

But when I turned over a loaf of what I thought was just soda bread and saw a list of ingredients that included not only strange acids and E numbers, but also things like “coloring” and - most ominously - “flavoring”, I gave up in disgust. Flavoring! In brown bread!

It was at this point that I decided that flour and baking tins didn’t sound like such a bad idea, and I went home to bake my own loaf after all.

It’s at times like this you want a fast, easy recipe, and the fastest, easiest yeast-bread recipe I’ve come across is from a woman named Doris Grant, by way of Delia (an alternative version of the recipe can be found at Epicurious). The bread requires no kneading, it only needs to rise once for about 30 minutes, and it bakes in roughly 40 minutes. That means that, in just about an hour and a half, you can go from having no bread in the house to having a crusty, freshly baked loaf you’ve crafted yourself.

For fellow residents of East Sussex, the stoneground wholemeal flour from Michelham Priory Mill (sold at Lewes farmers’ market) is ideal for making this bread, as is the flour from Shipton Mill (available at some supermarkets). But I’ve also used random mixtures of leftover bits of wholemeal, spelt, and granary flour and the results are equally good.

The texture of the bread is something like soda bread - crumblier than if you had kneaded the dough for a while, but strong enough to hold up around a cheese and pickle sandwich, for instance. It’s lovely served with a soup or stew, it makes excellent toast, and it stays good for ages in the bread bin. It is, in short, the perfect easy, all-round bread. 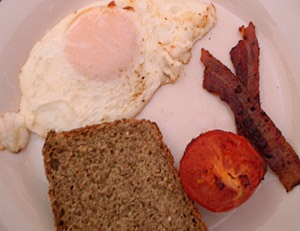 Even if you’re a baking virgin, you should give this bread a try. Trust me, it won’t let you down.

Mmm nice. I don’t make anywhere near enough bread myself and when I do it’s in a bread maker (although personally I don’t think there’s any shame in that). It’s gotta be said: brown bread like this brings a whole new class to beans on toast.

No, there’s certainly no shame in a bread maker, and if I had one myself, I’m sure I’d use it - though when I’m in the right frame of mind, there is something very pleasurable about kneading and stretching some warm, yeasty dough by hand.

And yes, beans on brown bread toast - yum. Even better when you melt cheddar onto the toast before applying the beans. To be served with brown sauce, of course.

hmm… I should try it one day! make my own bread.. wonderful jessica

thanks for passing on the recipe Jessica. I make my own bread almost everyday and I like to try out new types although the lack of kneading is almost a disappointment!

On days, like you described above, when I’m feeling lazy I use my KitchenAid mixer to grind all the ingredients together, knead the mixture and knock it back before cooking. Much easier than by hand but not as satisfying.

Oh yeah, i gota make some bread like this soon. It would go perfectly with my latest special Butternut Squash Soup. Looking forward to trying it out now.