The culinary world is awash with one-pot spiced rice dishes: from Indian pulau to Turkish pilav to the etymologically unrelated but spiritually similar paella and countless others. What a lot of people don’t know, however, is that the southeastern United States has its own traditional rice dish, which is often spelled pilau but frequently pronounced “pur-lo” or “pur-loo”.

At its most basic, pilau is rice cooked together with meat, seafood or vegetables. Like most dishes with a long history, there are as many different versions of pilau as there are cooks who make it. My version comes from my paternal grandmother (or possibly even great-grandmother), who was a native of St. Augustine, Florida. St. Augustine’s cuisine is southern with a Spanish/Caribbean twist—think fried shrimp and hush puppies, conch fritters, fresh fish, spicy Minorcan clam chowder, okra and tomatoes, avocados and corn, fiery datil peppers, and sinfully delicious sweets like peach, pecan and Key lime pie. 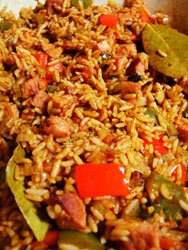 Like many pilau recipes, my grandmother’s pilau has the “holy trinity” of celery, onion and bell pepper, as well as the all-important bay leaves. But what makes it stand out is the addition of a liberal amount of allspice and whole cloves, flavors I haven’t seen in other “purloo” recipes but that are common in the Caribbean. Also, while some versions of pilau are more soupy, this one is drier and is best served with a good dollop of mango chutney on top (and maybe a dash of datil pepper sauce). The spices and the chutney give my grandmother’s pilau a distinctly zesty flair, which is nicely complemented by a spicy Spanish red wine or a frosty beer.

This recipe will realistically serve three people (or possibly even four, if you have a starter and some sides)—but Jeremy and I have been known to eat it all ourselves in one sitting... 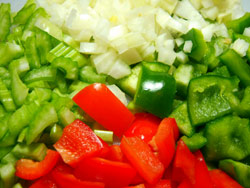 Heat the oil in a heavy pot (ideally, a casserole or Dutch oven) over medium heat. Add the onions, celery and peppers and sauté about 10 minutes, until the vegetables have started to soften. Add the cubed ham and sauté another 2-3 minutes. Add the rest of the ingredients and stir everything together. Cover the pot and bring the ingredients to a boil rapidly over high heat, then turn the heat to low and cook covered until the rice is tender (about 30 minutes). That’s it! 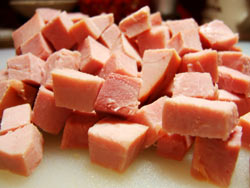 The ham adds a nice smoky flavor to the pilau, but you could also make the dish with smoked sausage, shrimp, chicken, or just vegetables (or some combination of all of them). If you leave out the ham, you’ll probably need to add a bit more salt to taste. Pilau holds very well, which makes it a party/picnic/potluck favorite. You can make it ahead of time, freeze it if you need to, and reheat it in the oven or a microwave.

Pilau is very easy to make, but I do have a few tips. First, try not to stir the rice as it’s cooking. You can fluff it with a fork, but if you stir it, it tends to turn mushy—and you want separate, firm grains of rice, not risotto. Ideally, you shouldn’t even take the lid off to take a peek until at least 20 minutes have gone by. There isn’t much liquid in this recipe, so the rice essentially steams in the pot. But the rice will only cook if the lid is on and the steam has built up inside the pot. So sit back and relax, have a nice glass of wine, and resist the urge to poke at the rice.

You should also resist the urge to add too much more liquid (unless you do want it soupy). The small can of tomatoes and splash of extra water won’t seem like enough at first, but it really does work. Using a parchment lid in addition to the pot lid might help as well, but the rice generally cooks fine as long as you leave it alone. 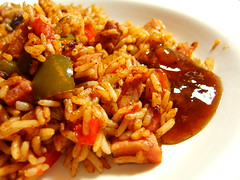 And finally, some rice will inevitably stick to the bottom of the pot. If you’ve cooked the pilau over a very low heat, you may get golden crunchy bits that you can eat. But sometimes you’ll wind up with carbonized bits that don’t taste very nice at all. It’s no big deal; just avoid scraping the very bottom of the pot when you serve the pilau—which may be hard, since it tastes so good you’ll want to eat every last bite!

I want to have some now! Your desrciption of the dish makes my mouth water and I can’t wait to get a batch made up. Yummm!

P.S. The family version of chicken pilau (perlow)is from Frankie Walker or her cook - at least according to family legend (source is your Aunt). Da’s cook (St Augustine resident)and/or Mary, the woman who took care of me and cooked while we were at West Point and in St Augustine, is purported to be the original recipe person (for us). So you are right on target with the history of our dish. Vati.

I can’t wait to prepare this for my 30th bday on the 3rd of march. I will let you know the results. The guest will be mostly swedish. mmmm