To everything there is a season

When The Byrds ripped off Ecclesiastes for the lyrics of “Turn!, Turn!, Turn!”, they probably weren’t thinking about food. But for me, it’s food that marks the changing of the seasons (well, food and weather — but you can’t eat the weather).

Berries are ripe for the picking. The English really have a thing for strawberries and, for a brief period during the Summer, it’s easy to understand why. 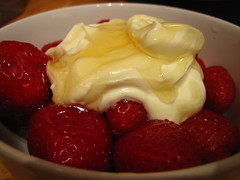 The traditional way to have strawberries is with cream. If you want to try something slightly different, try having strawberries with a dollop of yoghurt, drizzled with honey. The combination is remarkably good.

This is also the one time of year when tomatoes won’t necessarily taste mealy and flavourless. I know quite a few people who claim not to like tomatoes, but I think they’ve just never had one at the right time. Tomatoes can be grown all year í¢€˜round in a greenhouse but they won’t taste anything like vine-grown tomatoes. When they’re ready for eating, they are unbelievably tasty.

There are plenty of green things in season right now; peas, broad beans, courgettes. I know you can get peas all year í¢€˜round, but they’ll never taste as good as they do right now. This is also the time for new potatoes — the two go great together. 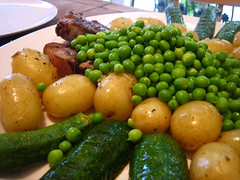 But most people’s interest in verdant vegetables is eclipsed by the uncontrollable urge to sear some meat. There’s nothing nicer than sitting outdoors, eating some freshly cooked food from the barbecue.

I would caution against going down the traditional route of cooking sausages on the BBQ. There’s a whole world of delicious foods to try throwing on the grill. Sausages are a fiddly shape and they can take ages to cook right through.

I’ll admit there is some perverse pleasure to be had in consuming little tubes of meat that are carbonised on the outside and barely cooked in the middle. But you’re not in the boy scouts anymore. You don’t want to spend all your time playing with fire, do you?

Try getting some minute steaks. They’ll be cooked in no time and the smoky barbecue flavour really adds to the taste.

How about some fish? You could put some nice firm monkfish on a skewer with bacon. If that sounds too time-consuming, just slap down a nice fillet of mackerel.

When you’ve eaten your fill of charred animals, you can make a tasty dessert with some bananas and chocolate. Take a banana, slice it open on top, stuff in some chocolate, and place on the barbecue. The skin will blacken, but that’s okay: you won’t be eating the skin. The chocolate will melt and the banana will soften, making a lovely gooey mixture that you can eat straight out of the skin with a spoon. I know bananas aren’t exactly local produce, but they are in season all year and this is a great way to get your potassium.

Every season has its own treasures. Winter, for example, is a great time for hearty, cosy meals. But Summer is the only time that you’ll get to sample seasonal food at the same time as you’re soaking up the sun.

Make the most of it. You know how fickle this weather can be.

You can find more seasonal suggestions at the BBC Food website.

I’m far from england, but I like the good food too.

So far we have had 3 weeks of sun and dry with no rain. Ireland for once is being consistent, not fickle.

Does this mean with Global Warming that the UK and Ireland will be the new San Diego?

Berries… ummm… I am waiting for blackberries. Gooseberries are in the stores now, but what do I do with them? Do tell…

if tomatoes are grown in a greenhouse, aren’t they still grown on a vine?