Even though runner beans are native to the Americas (Central America, to be precise), I was unfamiliar with them before moving to England. And even after spotting them in the supermarket here for several summers in a row, I shied away from them. This was partially because I’ve only really come around to legumes like green beans in the past few years. But it was also because the big, tough-looking pods intimidated me, and I really had no idea how to tackle them. 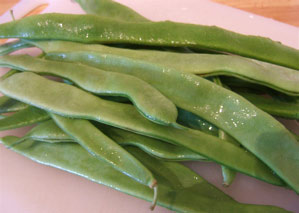 There seem to be two schools of thought on how runner beans should be prepared: stewed slowly and served up soft, or cooked quickly and left with some bite. There also appear to be two main ways of carving up the massive beans into serving-sized pieces: either cut width-wise into small diamond shapes, or sliced length-wise into long strings. 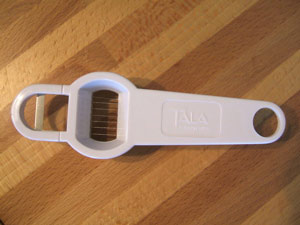 I subscribe to the latter school of thought on both counts: I like my beans a bit on the crisp side, and long slices not only cook more evenly, they’re more fun to eat. And if you have a “bean slicer”, then the slicing should be a breeze (I recently bought a bean slicer but haven’t used it yet, so I can’t comment on its performance—but it’s got to be easier than slicing runner beans by hand).

If you find yourself with a big pile of runner beans, here’s what I recommend doing with them. First, wash them, of course. Then top and tail them.

Next, I recommend cutting them in half if they’re really long so that they’re easier to work with.

If you need to string the beans, you can do so with a sharp knife, vegetable peeler, or the aforementioned bean slicer (mine comes with a little blade on the top for stringing). I took the lazy way out and just cut off a thin bit on either edge of the bean to get rid of any stringiness. 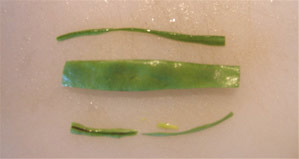 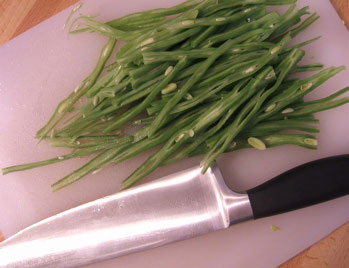 Then cut what’s left into long, thin slices. If you don’t have a bean slicer, you’ll want a big, sharp knife (and a good deal of patience).

When you’ve got a nice big pile of sliced beans, bring a pot of water to the boil, add a hefty pinch of salt, and throw in your beans. They should take about 5-10 minutes to cook. You don’t want them to go mushy, so test them after a few minutes to see how they’re progressing.

Once they’re done to your liking, drain them and then put them in a dish or throw them back into the warm pot. Dress them generously with extra virgin olive oil and freshly squeezed lemon juice, and season them well with salt and pepper (don’t be shy with the dressing and seasoning—these beans can take it). 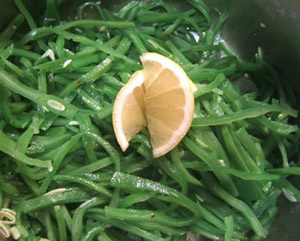 They can be served hot or at room temperature and make a good accompaniment to a summery meal. I reckon that with some feta cheese mixed in with them, they’d even make a good salad.

They may be a bit labor-intensive, but runner beans make for good seasonal summer eating in England. 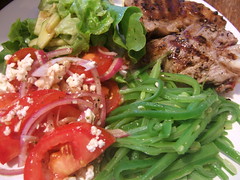 OK, how does your bean slicer work exactly?

Slicer update: since attempting to use the bean slicer, I’ve decided that it’s actually easier to just cut the beans with a big knife. Maybe I wasn’t using it right, but I never managed to get the slicer to actually slice rather than just squish the beans into a mush. I guess sometimes there just aren’t any shortcuts…

According to the wikipedia article undercooked runner beans are poisonous. Is that true or just one of those wiki-urban legends?

i think you make it sound fun and easier.

You need to have firm runner beans to pull them through the slicer. When they are firm they slice very easily & it’s time saving. If they are a bit floppy they don’t shred easily so it’s better to cut them. Sesame seeds are lovely tossed through with the oil & salt & pepper.