I’m here to pay homage to quinoa. Quinoa (pronounced keen-wah) is an ancient South American grain that deserves a lot more recognition than it gets. 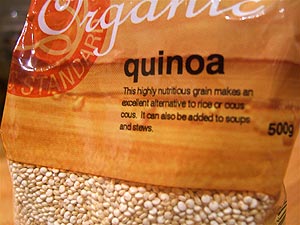 I first heard of quinoa in a lovely little cookbook that I bought many years ago called simply Grains, by Miriam Rubin (the book appears to be out of print now, but it’s definitely worth grabbing if you happen to see it somewhere). The Grains book piqued my interest in this food of the Incas, so I hunted down some quinoa in a health food store, and it’s been a permanent staple in my pantry ever since.

Quinoa is billed as a grain, but it’s actually a high-protein, gluten-free, super-nutritious seed that is as tasty and versatile as it is healthy. In its uncooked state, it takes the form of small off-white disks. It swells when it’s cooked and has a lightly nutty, slightly earthy flavor - very mild but distinct, and much more interesting than rice or couscous. 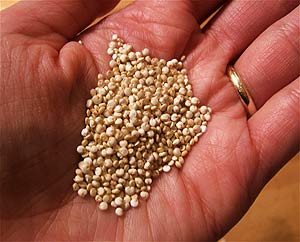 Quinoa is as easy to cook as rice. In fact, it’s cooked exactly like rice, though it needs to be rinsed first. No big deal: just throw it in a fine sieve/colander and run it under some cold water, or swish it around in a bowl of water and then drain it.

To cook it, use two parts liquid to one part quinoa. I like cooking quinoa in vegetable or chicken broth to boost its flavor even more. So, for one cup of quinoa, bring two cups of broth to a boil (you can use a stock cube - no need to go boiling up a whole chicken just to cook some quinoa). Add your rinsed quinoa and maybe a bit of ground pepper, then cover and simmer for 15-20 minutes. When the quinoa is done, it will have a gorgeous texture: soft and fluffy, with the lightest bit of crunch.

Quinoa pairs particularly well with tomato-based dishes - or at least, that’s what I’ve always had it with. Try using quinoa anywhere you’d use couscous or rice. In the Grains cookbook, Miriam Rubin suggests serving it with ratatouille or stirring cooked quinoa into tomato soup along with a dollop of pesto. 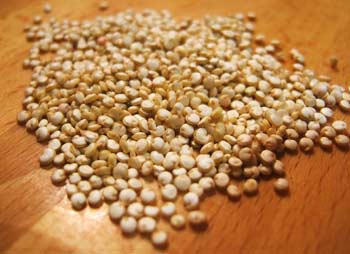 Lately I’ve been enjoying quinoa as an accompaniment to an easy chorizo and chickpea stew. To make the stew, take about half a cup of sliced spicy Spanish chorizo and sauté it in a bit of olive oil over medium heat for two or three minutes. Remove the chorizo with a slotted spoon and set it aside, then sauté a small chopped onion in the same pan until the onion is soft. Stir in a crushed garlic clove, then add a splash of dry sherry or white wine.

When the liquid has mostly cooked off, stir in about a tablespoon of tomato paste (tomato puree). Season with half a teaspoon of smoked paprika and a some salt, then add half a tin of chopped tomatoes, some chopped roasted red peppers if you have them on hand, a tin of drained chickpeas, and about a cup of vegetable or chicken broth (enough to almost but not quite cover the other ingredients - and again, you can use a stock cube).

Simmer this for 15 or 20 minutes, or however long it takes you to cook up some quinoa separately. Add a few handfuls of chopped kale, chard or spinach to your chickpea mixture towards the end of the cooking time and simmer it for a few minutes, then stir in the chorizo again just to warm it through. Serve the stew with the quinoa, adding a dollop or two of Greek yogurt if you’re feeling decadent (this may sound weird, but trust me, it’s good). 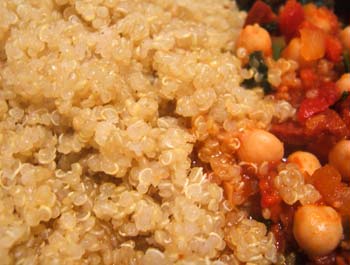 I’m pretty much stuck in a rut with using quinoa like rice because it’s so easy and so good, but there’s a whole world of quinoa to explore out there: quinoa pilaf, quinoa in a salad, sweetened quinoa with fruits and yogurt for breakfast, toasted quinoa cereal, quinoa in muffins and bread...

Still, if you’ve never had quinoa before, then I recommend starting simple. The next time you’re tempted by couscous or rice, try boiling up some quinoa instead. It’s healthy, it’s yummy and it’s fun to say. And if it was good enough for the Incas, it’s good enough for me.

I was introduced to quinoa by Nigel Slater who recommended pairing it with cheese (pretty much any cheese) stirred in at the end. I share your enthusiasm for this wonderful grain, and at the moment my favourite is quinoa with roasted veggies and cashew nuts.

Cheese? Wow, interesting - I must say, I never would have thought of that. I’ll have to try it.