I’m not a particularly experimental or inventive cook, so I generally need a “crutch” when it comes to thinking up new things for dinner. 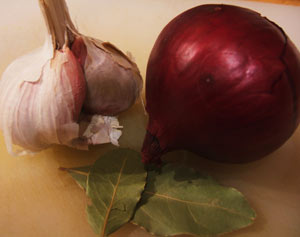 The simplest way of finding new meals is to look for recipes in cookbooks or online, of course. Another fun method is trying to replicate tasty dishes I’ve had in restaurants. And a third way is to play the variations on a theme game. This involves taking a recipe that I already like and tweaking it by “transposing” its components and, essentially, moving the whole thing to a different country (the variations on a tomato salad with herbs and cheese described in this post are a good example of this).

This lentil soup recipe is actually the product of all three methods. While browsing through food blogs one day, I chanced upon this recipe for lentil, chestnut and pancetta soup. If ever two words could make my heart sing, it would be “lentils” and “pancetta”, so I quickly set about making the soup, and it was very good indeed. 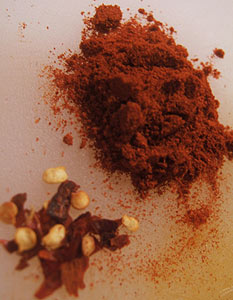 Then one evening, as I sat pondering what to do with a bit of leftover chorizo I had in the fridge, I remembered a smoky lentil casserole I’d had at Bodega D’Tapa, a little (very little) gem of a tapas bar in Brighton. The idea of lentils and cured meat got me to thinking about the lentil and pancetta soup, which I decided I’d move from Italy to Spain by substituting chorizo for the pancetta, replacing the sage and thyme with pimentón (smoked Spanish paprika), and adding some onions and garlic for extra richness.

To my delight, the Spanish version of the soup turned out great. The combination of earthy lentils, smoky paprika, spicy chorizo and sweet chestnuts is a real winner, and it’s quick and easy to make to boot.

The following recipe will really serve four, though I make the same amount for two because the leftovers are yummy for lunch. Though the ingredients have been tweaked, this recipe hews very closely to the original one, so most of the credit for it should go to Meg of Though small, it is tasty (who, incidentally, used to be a resident of Brighton! Small world...)

Cook the lentils and bay leaves in a pot of boiling water for about 25 minutes, until the lentils are tender but still firm. Drain the lentils, saving the cooking water. 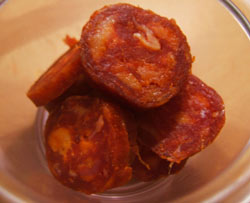 In the meantime, heat a splash of olive oil in a pot over medium-low heat and sauté the chorizo for a minute. Remove the chorizo and set it aside, then sauté the onion in the oil for about 10 minutes, until it’s soft. Add the garlic and sauté a minute or two, then add the chestnuts and cook them for a few minutes too.

Pour in the wine and simmer until most of the liquid has cooked off, then add the tomatoes, tomato paste, paprika, chili flakes if you’re using them, and salt to taste.

Simmer all of this until the mixture has thickened, roughly 15 minutes. Then stir in the lentils and as much lentil cooking water as you want (I make this like a thick lentil stew, but you can add more liquid if you want something more soup-like). Cook this together for another 10 minutes or so, adding the chorizo towards the end to heat it through. Season again if you need to, then serve it up! 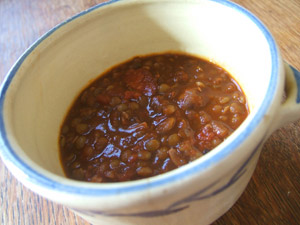 I like to use small, firm lentils such as Puy lentils for this, but I’m sure regular brown lentils would work just as well (or for extra authenticity, use Spanish Pardina lentils if you can find them). The chestnuts add a nice texture and sweetness, but I’ve made the soup without them and it’s still very good (and by the way, I don’t roast my own chestnuts—I just buy them already roasted and peeled).

For a vegetarian version of the soup, just leave out the chorizo. The pimentón will still give you a deep smokiness, and you could substitute some roasted red peppers to boost the flavor even more. Then you need nothing more than a spicy Spanish red and maybe a crisp salad to have a dinner that’s just delicioso.

Update: For an extremely fast variation on this soup, you can use tinned black beans instead of lentils.

Follow the steps for cooking the chorizo, onion and garlic mentioned above (you can sauté carrots and/or celery along with the onion if you have them), stir in the smoked paprika, add some tomato paste/puree or some tinned tomatoes if you like, then chuck in two tins of black beans (with their juices) and enough water or vegetable stock for the soup to reach the consistency you want. Simmer it for as long as you like, put the chorizo back in, season it to taste, and enjoy!

If your looking for a place that sells Hot Paprika I can recommend MexGrocer.co.uk

They have other ingredients but this is just the tip of the iceberg, They have lots of different products to drool over.

Soyrizo is a good substitute for chorizo. I am vegan, so am always looking for new ways to use this product. Available iin most major food stores, and health food markets.

Soyrizo is a good substitute for chorizo. I am vegan, so am always looking for new ways to use this product. Available iin most major food stores, and health food markets.

this looks amazing….will have to try it out soon!

Nice recipe, but I’ll stick to the traditional spanish lentils with chorizo leaned from my mother, aunts and grandmother ;)

It’s fair simple, just fry some onion, green pepper and carrot (all chopped), and add the lentils after 5 minutes (aprox) and water. Boil gently while preparing a nice chorizo fried with panceta or other pork and veal meat. Add the meat (with the oil… it has the chorizo flavor) and let it boil.

I am fortunate having come across this recipe. I cooked it today and found it extremely delicious. Though I could not manage to put roasted chestnuts, but it was still fantastic. Also, I boiled the lentils in salt-reduced chicken stock and used a 50-50 mix of brown lentils and grain/lentils soup mix.

I tried this / tweaked it a little and boy was it spot on!!!

Thank you for this fantastic recipe - eres maravillosa

Awesome, super tasty… but I think 10 minutes sauté of the onions might be a little long.