The term Sloppy Joes will probably be familiar to almost every American, but it may be a mystery to the rest of the world. 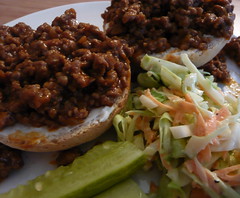 In essence, Sloppy Joes is ground meat in a simple barbecue-like tomato sauce which is typically served on a hamburger bun. It’s one of those classic American family meals, probably because it’s fast, cheap, filling, and can be made for a crowd. I suspect most Americans my age have fond memories of eating it as kids, but it’s a meal that seems to have fallen out of favor somewhat, probably after getting a bad reputation thanks to the likes of Manwich and Hamburger Helper.

Let’s be clear: there is absolutely nothing glamorous about the Sloppy Joe. But then, there’s absolutely nothing glamorous about a hamburger either, but you don’t hear anyone complaining about that. Sloppy Joes is summertime food, comfort food, family food to be eaten off of soggy paper plates with a helping of potato salad or coleslaw and washed down with a root beer or an actual brewski. Made from scratch, it’s quick, tasty, and not even necessarily all that unhealthy.

Like most popular dishes, Sloppy Joes can be made any number of ways. You may get chopped peppers, chilies, celery, garlic, or who knows what else in any given Sloppy Joes recipe. Some people add spices like paprika or cumin, others may use ground pork or chorizo rather than ground beef. Sometimes Sloppy Joes is topped with cheese or raw onions, like a taco (which really makes it more like a Sloppy José, I suppose).

My particular recipe comes from my granddad in Florida. There are no extraneous flourishes to it; it’s meat and onions in a sweet and tangy tomato sauce, and for a fun meal on a sunny day, it can’t be beat.

Cook the onion in the butter until it’s soft, then stir in the meat, salt and pepper. Once the meat has browned, stir in the sauce and cook the whole thing slowly for about 15 minutes. Serve on hamburger buns or other rolls, with mayonnaise, either open-faced for eating with a knife and fork, or closed if you’re brave enough to try to pick the thing up (it’ll be very juicy!). Oh, and some hot sauce wouldn’t be out of place either; my family uses datil pepper sauce made according to my granddad’s recipe, but since you’re not likely to have any of that sitting around unless you happen to be either from St. Augustine, Florida or related to me, then Tabasco or something similar would do the trick as well. 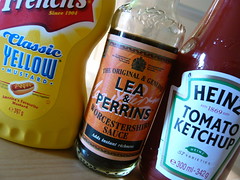 If you insist on being really healthy, you could use very lean ground beef and/or drain off the fat from the pan before adding the sauce, and you can easily make a decent veggie version by using Quorn or some other fake meat product.

If you have leftovers, they’ll taste just as good the next day. And if you’re daring, try them on a pizza with sliced jalapeños—extremely unconventional, yes, but surprisingly tasty.

Hey, good to see you’re back :) Will definitely try this out this summer; my tip: ground lamb!

In some parts of New Jersey and Massachuessets, I’ve seen a turkey, provolone, cole slaw on rye sandwich refered to as a "Sloppy Joe"

This is well described and clear instructions. Thank you.

I’m part of the rest of the world and there’s a time warp! I had heard the term "Sloppy Joes" but never realised what it was. I came across a Eurasian or Cristang reference to Chile Con Carne and its "Sloppy Joes" analogy and was intrigued. This was in a Malaysian Malay "foodies" type blog "masak masak". The article was reviewing food finds in Kuala Lumpur and a description of a Chile Con Carne topped open hamburger was described which they suggested was parallel to a Sloppy Joe.

Their description was enticing and lead me on the search for "Sloppy Joes" thus your Journal. It’s all kind of fitting together now and your recipe resembles a maternal recipe of a few years ago. Something I hadn’t even thought of until seeing yours. Now I have to find that recipe and am no longer interested in my original primary search…….

Went online to peruse "Vegan" meal receipes and this one was listed. When I went to get the receipe this came up lisring "ground beef" as the main ingredient!! Shocked and bummed all at the same time!

Well, the recipe does say you can make a veggie (or indeed vegan) version by using a meat substitute like Quorn or something soy-based (and obviously replacing the butter - and the Worcestershire sauce for that matter) so maybe all isn’t lost.

Tried this with a bit of garlic powder in the sauce, and used Yves veggie ground instead of causing a death. good stuff

found it quite bland though so we ended up adding in taco seasoning because that’s what we had.