Update, February 2009: I’m very sad to report that Pintxo People has closed in Brighton. It seems being out in the provinces wasn’t worth the effort, so the owner has upped sticks to focus on his London establishments.

When Pintxo People opened up down the street from us a few years ago, it was a welcome addition to the Brighton tapas scene—and, indeed, the Brighton restaurant scene. 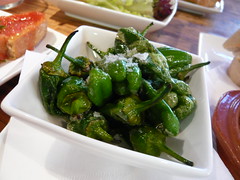 Pintxo People is divided into a casual tapas bar and deli on the ground floor and a fancier cocktail bar and restaurant on the upper floor. I’ve been to the downstairs tapas bar on several occasions and always enjoyed it very much. They do five different types of sangria, wonderful fruity coffees, and a wide range of Spanish bar snacks, including the always tasty Padrón peppers. They also do pastries and coffee in the morning, and they have WiFi, so it’s a really nice place to drop in for a pick-me-up at any time of day. And the service has always been friendly and helpful to boot.

I had my birthday lunch in the downstairs bar last year, so this year I decided to up the ante and go for a full-on birthday dinner in the restaurant. The restaurant is strikingly decked out in red and black, with cupola skylights in a high ceiling. I’d never actually seen the restaurant in person, so as Jeremy and I sat up there on my birthday, it almost felt like we weren’t sitting in Brighton at all. That’s particularly funny seeing as not only were we very much in Brighton, we were right across the street from Waitrose (where I do my daily shopping) and just a five-minute walk from home. The architect and designer did an outstanding job of isolating the restaurant so completely from the noisy tackiness that is Western Road. 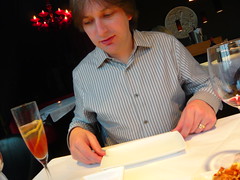 Pintxo People is known for its cocktails, so once we were seated, we scoured the long list and picked out aperitifs for ourselves (a cava and sherry cocktail for me, a citrusy rum-based one for Jeremy). Unfortunately, service got off to a slow start, so while I would have liked to have sipped my cocktail while I nibbled olives and perused the food menu, we eventually had to flag down a passing waiter and order drinks which didn’t show up until shortly before our food did

But this was a minor glitch in an otherwise lovely evening. Jeremy and I ordered a total of seven plates between us, which, while quite a lot, was certainly not an overwhelming amount of food for two hungry people. The server split our choices into two batches for us: starters (Padrón peppers, serrano ham, octopus with chorizo) and mains (rib eye steak with piquillo peppers and blue cheese, pork belly with olive powder, stuffed tomatoes, green beans with sherry shallots).

Our starters were all excellent, particularly those Padrón peppers (several of which were really rather spicy) and the ham, which was moist, thick-cut and outstandingly aromatic. We also received a complimentary plate of toasted baguette and tomato pulp—a deconstructed pa amb tomí  quet. 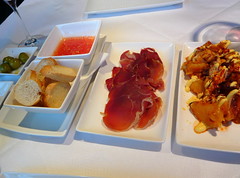 Once we had inhaled all of that, our second round of food came. Both the steak and the pork belly were flavorful and well prepared. The steak was cooked to dark pink perfection, with the sweet roasted piquillo peppers and salty Picos de Europa blue cheese packing a real punch. The pork belly was crunchy and salty, just as pork belly should be, and dusted with black olive powder which sounds pretentious but added a deep savory note to the dish. 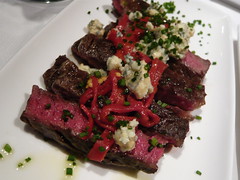 Of the vegetable accompaniments, the tomatoes stuffed with summer vegetables and manchego were probably the weakest dish; while tasty enough in their own right, they had trouble standing up to the dishes they were served with. The green beans with shallots and sherry, on the other hand, were the perfect foil to our meat feast, both texturally and taste-wise. They had just the right amount of crunch, and the tangy sherry dressing cut through the richness of the cheese and meats.

We washed all of this down with an inky Priorat, a wine we discovered in Barcelona which is quite difficult to come by in Brighton. Our waiter hesitated briefly when we asked for the Priorat and later admitted that he’s not a fan of it himself (and rarely sells any of it at Pintxo People—perhaps because it’s the most expensive wine on the otherwise remarkably reasonable wine list), but it was right up our alley, with all the ripe fruit of a sunny New World wine tamed by the lean edge of an Old World one. And it was served in a rather snazzy decanter to boot. 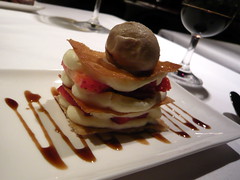 We finished things off with two desserts. Jeremy had chocolate served in five different ways with an apricot sauce, which was accompanied by a fragrant moscatel. I opted for the “tiramisu,” which was really more of a millefeuille, with layers of crunchy biscuit separated by mascarpone and strawberries and topped with a dollop of coffee ice cream. I had a glass of Noé Pedro Ximenez sherry to go with it, which was so fabulously figgy and raisiny that it was almost a dessert in itself. The desserts were small, perfectly formed, and really just the right amount to wrap up our meal.

I was impressed with the Pintxo People restaurant. The dishes had just the right amount of culinary flair while still remaining down to earth, and everything was prepared impeccably and served elegantly. Our meal wasn’t cheap, but that was primarily down to the wine and the fact that we probably ordered several more dishes than the average diner; you could certainly get by with spending far less than we did and still have a satisfying meal. In any case, I enjoyed both the food and the atmosphere, and I would certainly go back and treat myself to dinner there again.