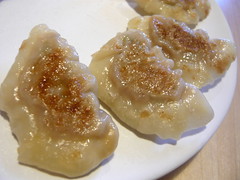 I love gyoza. Jeremy and I never pass up the opportunity to order the gingery pork dumplings when we’re in a Japanese restaurant; they’re kind of the standard by which we gauge new Japanese restaurants, much like spicy papaya salad is our standard for Thai restaurants. In Brighton, for instance, the best gyoza by far can be found (where else?) at E-Kagen, where the dumplings are light and tender, garlicky and gingery, and served with the loveliest citrus-tinged dipping sauce.

But as much as I love gyoza, I had never given any serious thought to making them myself—and even this batch I made was actually a mistake. I had planned to make the much simpler-looking shumai dumplings from the Just Bento site, but when I was in the Asian market, I forgot what kind of dumpling skins I needed. Since I was in Japanese mode (having just eaten delicious sushi at E-Kagen), I picked up some frozen gyoza skins, only to get home and realize that I actually needed something more like wonton skins.

I recalled seeing a gyoza recipe on Just Hungry, the companion site to Just Bento, and since I’m not one to be put off by an intriguing culinary challenge, I thought, “Well, why not?” Thanks to last week’s veg box, I already had lots of green onions and cabbage in the fridge, and thanks to my recent adventures in bento, I was stocked up on soy sauce, sesame oil, and ginger too. That just left the ground pork, which was taken care of by a quick trip to the supermarket. 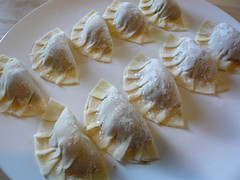 I know from past experience that making small, filled foodstuffs—spring rolls, ravioli—can quickly get tedious; the first few are fun, but by the time you’ve carefully stuffed and sealed a dozen ravioli, the novelty has generally worn off. I was worried that this would be the case with the gyoza as well, but I was so excited that they were holding together and looking really rather tidy with their nice little pleats that I didn’t get irritated making them—even after turning out about 35 of the things (as it turns out, I kind of folded them wrong, making something more akin to half-moon agnolotti than proper pot-bellied gyoza—but hey, you gotta start somewhere). 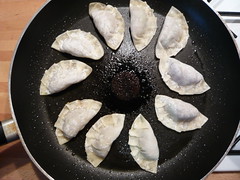 Most of the gyoza went straight into the freezer, but I put 10 aside for immediate cooking. I used the steam-frying method, which involves browning the bottom of the gyoza in an oiled frying pan, then adding a bit of water and steaming them for several minutes. This makes for a lovely crispy bottom, moist filling, and tender skin.

When the gyoza were done, I threw together a dipping sauce with soy sauce, rice vinegar, and a splash of sesame oil and mirin, and then Jeremy and I sat down to give them a try alongside our dinner of teriyaki salmon and Asian coleslaw. And what do you know: they tasted like gyoza! They weren’t as delicate as E-Kagen’s, and my dipping sauce didn’t have the same citrus tang, but they were unquestionably very, very yummy, and they could certainly hold their own against many of the gyoza I’ve had in restaurants.

So if you’re a fan of gyoza, and you like a tiny bit of a challenge in the kitchen—enough to keep things interesting, but not so much that it’s stressful—I’d recommend giving this recipe a try. And the pleasure you’ll have eating these little morsels will be matched by the satisfaction you’ll feel at having created each one yourself.

So HAPPY to have found your blog, so SORRY to have found it after it seems to have slipped into a deep sleep. I hope you post again - I’ve enjoyed your take on things foodish.

Thanks very much! The blog’s not dead yet - we’ve got more posts in the pipeline, we just need to get them together and actually post them! :-)

YAY! I was taken with your section on Spätzle. My girlfriend and I are going to have a pork roast and spätzle for Christmas dinner. Thanks!