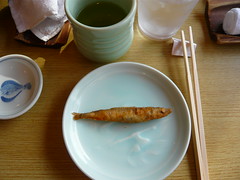 I’ve long claimed to be a fan of Japanese food, but it’s fair to say that, prior to going to Japan, I didn’t actually know much about Japanese cuisine beyond noodles, teriyaki and sushi (and not even the “exotic” kinds of sushi). One reason I was so excited to have the opportunity to visit Japan this year was that I suspected it would open up new culinary worlds to me—and I was not disappointed.

During our 10 days in Tokyo, Kyoto and Osaka, Jeremy and I were treated to everything from an elegant 13-course feast at a traditional inn in Kyoto to skewers of grilled meat served up in a smoky yakitori bar under the train tracks in Tokyo. We ate sushi for breakfast, eel for dinner, and snacked on tempura, octopus balls (not that kind!) and green tea ice cream in between (I also drank numerous dark cherry mochas from “Sutabakusu”, but that’s beside the point). With the exception of a crepe, a few cinnamon rolls, and a (scrumptious) hybrid Japanese/Italian dinner in Osaka, it was all Japanese food all the time. I’m sure that if I lived in Japan I would eat much more internationally, but it was fantastic to totally immerse ourselves in Japanese food culture for our short trip there. 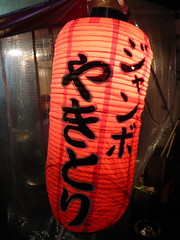 Jeremy and I had a list of foodie experiences we wanted to have in Japan: in addition to eating all the things we like having outside of Japan (namely, sushi and noodles), we also wanted to go to an izakaya (a sort of Japanese tapas bar), go to an unagi (eel) restaurant, eat bento on a train, eat okonomiyaki and the aforementioned octopus balls in Osaka, visit Tsukiji fish market in Tokyo for the freshest sushi on earth, and—perhaps above all—visit Yakitori Alley. I’m happy to report that we got to do all of these things, and they pretty much all lived up to my expectations. I could take or leave the okonomiyaki, with all its sweet brown sauce and mayonnaise, but izakayas are great fun (you order drinks, order food, order more drinks, order more food, and so on), and Yakitori Alley was exactly how I imagined it would be (a kind of Japanese version of the night-time food stalls in Bangkok).

The biggest revelation about the food in Japan was not so much the different tastes as it was the different textures. Contrary to what the teriyaki-drenched specimens served in the West would lead you to believe, much Japanese food is quite subtly flavored. But there’s nothing subtle about the gristliness of a deep-fried chicken knuckle, or the stickiness of taro, or the sliminess of a bowl of cold udon noodles topped with gelatinous seaweed and a raw egg. I ate all of these things and largely enjoyed most of them, but there was a definite mental barrier to overcome as I chowed down on a delicious chicken meatball made every so slightly (and, indeed, pleasantly) crunchy by the addition of ground up cartilage. 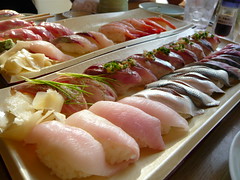 This probably doesn’t sound particularly appetizing—but frankly, ground up meat and fat stuffed into an intestine doesn’t sound particularly appetizing either, and yet most (carnivorous) people in the West enjoy a nice sausage every now and then. It’s all a matter of perspective and what you’re used to. Along the same lines, I got to try some horse sashimi, which sounds much more radical than it tasted (it was quite mild). Unfortunately, I didn’t get the chance to taste two of the more imposing foods I know of: natto and sea urchin. I also passed on eating whale, and I never worked up the courage to order any fugu, though if someone had passed me a plate of it, I’m sure I would have indulged (and then neurotically checked myself for signs of tetrodotoxin poisoning for hours afterwards).

But don’t let me give you the wrong impression of Japan; it wasn’t all chicken gristle and My Little Pony. There were plenty of “unchallenging” foods as well: fantastic tempura peppers and fried squash, big bowls of steaming noodle soup, sticky rice and succulent grilled fish, Japanese pizza, crunchy fresh vegetables dipped in miso, delicious deep-fried donut-like treats, sweet persimmons, and the biggest, juciest, most fragrant and fantastic grapes I’ve ever had in my life. 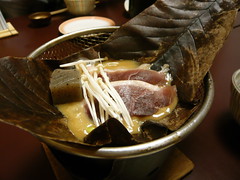 There were a few real food highlights that stick out in my mind. One was our multi-course kaiseki meal at the inn on our first night in Kyoto. The whole meal was splendid, but our favorite course was sliced duck breast with enoki mushrooms and miso, served spectacularly in a giant leaf and cooked over a open flame. The presentation alone was amazing, but the taste of the fatty duck with the sweet and salty miso was a revelation (miso itself was a revelation—so tasty and so versatile—and it was the first foodstuff I bought for our own kitchen after we got back from Japan).

We also found a great noodle restaurant in Kyoto called Omen Nippon (which apparently has a branch in New York City). The speciality at Omen Nippon is udon noodles, served in a bamboo tray alongside a plate of artfully arranged vegetables, a dish of sesame seeds, and a big bowl of hot broth. You season the broth with the vegetables and sesame and then dip your noodles into it, mouthful by mouthful—a deeply satisfying and calming way to eat. All of the flavors and textures were perfectly balanced, with the rich, smoky broth perfectly complementing the tender and springy udon and the slightly crisp vegetables. We enjoyed it so much that, despite our compulsion to try as many different things as possible when we travel, we had lunch there both days we were in Kyoto. It was that good. 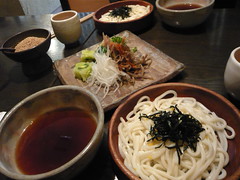 We also had a wonderful dinner at a tiny Italian restaurant called Vino Bar Due in Osaka. We were taken there by a Japanese-speaking friend and treated to a scrumptious multi-course meal of a very different type: squid with tomatoes, fish carpaccio, open ravioli with veal ragu, spaghetti with parmesan and black pepper (actually mixed together in a semi-hollowed wheel of parmesan—how awesome is that?), and absolutely sublime, rosy-pink Osakan pork topped with sweet grilled veggies and a light vinaigrette. It was our second-to-last meal in Japan and the first meal that wasn’t strictly Japanese, and as soon as I took my first bite of pasta and parmesan (one of my childhood comfort foods), I was enveloped in warmth and contentment and a feeling of home. That single evocative mouthful brought home the fact that while Japanese food is wonderful, Italian food is my soul food. 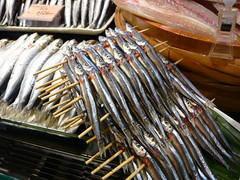 But it’s good to get out of your culinary comfort zone sometimes, and Japan certainly offered plenty of opportunity to do that. From the department store food halls and streetside dumplings to the freshest and most elaborately presented sashimi I’ve ever had, the country was thrillingly awash with culinary delights pleasing to both the eye and the tummy. And we only managed to scratch the surface, really; I can’t wait to go back again someday and explore the other foodie treats Japan has to offer.

Hi Jessica. I was amazed by all the photos you and Jeremy took in Japan. It was a real pleasure having dinner with you guys the night before you left. Next time you come by, make a point of visiting Kyushu. The food in Tokyo is pleasing to the eye but nothing compares to the culinary delights to be discovered in the Southern islands of japan. The food is fresher, tastier and sometimes much more exotic than in Tokyo. In fact, I know many domestic culinary tourists who make a pilgrimage to Kyushu in the spring and Hokkaido in winter every year. I hope to meet you and Jeremy next time you come to Japan. Goodbye till then.

Hi Eugene, it was lovely to meet you in Tokyo! Thank you for the tip about Kyushu food—it sounds very intriguing, and hopefully on our next trip to Japan (whenever that may be), we’ll have the chance to experience some of it. Hope to see you again soon!