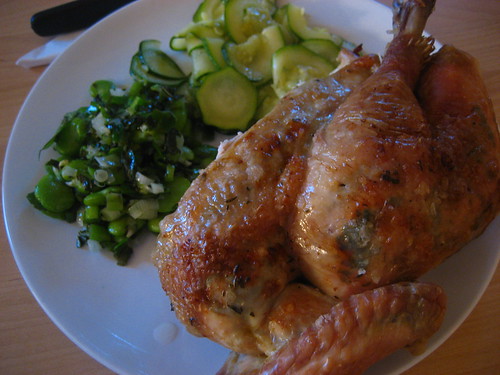 Spatchcock isn’t just a fun word to say, it’s also a great way to prepare a whole chicken (or most other poultry, for that matter).

To spatchcock a bird means to butterfly it, or to split it down the middle and flatten it. There are two great benefits to spatchcocking a whole chicken. The first is that a spatchcocked chicken cooks faster and more evenly than a chicken left in its naturally rotund state. This is great for when you want to cook a whole chicken on a barbecue, but it’s equally good when you’re just roasting the chicken in the oven.

The second advantage is that, with a spatchcocked chicken, all of the skin gets lovely and crispy, not just the bits facing upwards in the oven. Even in a convection oven, roasting an unflattened chicken won’t give you the same uniform browning as roasting a butterflied chicken—and let’s face it, the salty, crunchy, golden skin is one of the best things about a roast chicken.

If you’re lucky enough to have a butcher, you can ask him or her to spatchcock a chicken for you. But really, with a good pair of kitchen scissors or poultry shears, spatchcocking a chicken is the work of just a few minutes. They’re a few somewhat brutal, bone-crunching minutes, mind you; spatchcocking entails cutting out the chicken’s backbone and cracking or removing the breastbone, so if you’re squeamish about these things, then perhaps this is not the method for you. But if you don’t mind tackling your food head on (or, indeed, head off and spine out), then sharpen those scissors and get cuttin’.

To butterfly or spatchcock a chicken, just turn it breast-side down, cut up either side of the backbone to remove it, flip the chicken over and press it flat. If you want, you can take the extra step of removing the breastbone or keel bone, which can be a tiny bit fiddly but makes it a breeze to cut the chicken in half later.

There are many online spatchcocking tutorials; I’ve embedded my own little video here, complete with very weird-sounding commentary (I’m positive I don’t sound like that in real life), and Jeremy’s posted a series of short videos, from the spatchcocking to the serving, on Flickr. But I really like the video and explanation on the Virtual Weber Bullet site, which gets straight to the point and makes spatchcocking look just as simple as it actually is.

Once you’ve flattened your chicken, a very easy and delicious thing to do with it is douse it with lemon juice and extra-virgin olive oil, season it heartily with sea salt and black pepper, scatter several bay leaves over it and roast it in the oven until a meat thermometer stuck in the thickest part of the breast reads 160-165 Fahrenheit/71-73 Celsius (in my convection oven, this usually takes around 45 minutes at 355 Fahrenheit/180 Celsius for a 1 to 1.5 kg chicken). 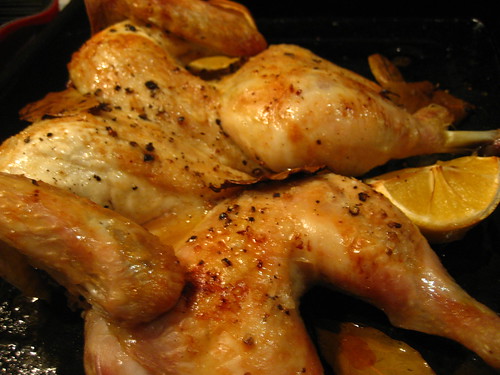 For extra indulgence, you could dot the skin with butter instead of using olive oil. And for super-extra indulgence with just a tiny bit more work, mash butter with some sea salt and chopped fresh herbs (like thyme, rosemary or sage) and smear it underneath the skin, particularly on the breasts and fat part of the thighs; this makes for delectably moist, fragrant meat and crispy skin. 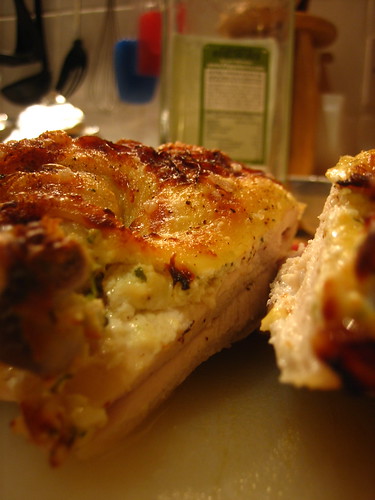 You can boost the flavor even more by cooking the chicken on top of aromatics like garlic cloves or hunks of onion or lemon (or, indeed, all three at once). Or for an easy one-pan meal, roast the chicken on a bed of thickly sliced fennel and leeks or chunky carrots and onions. For a summery bistro-style supper, serve a lemony spatchcocked chicken with a green salad and griddled asparagus or zucchini sauteed in olive oil, or for a hearty winter warmer, drape the chicken with bacon before roasting it alongside potatoes or squash.

And if you want to go completely crazy, mix goat cheese or ricotta with garlic, rosemary, salt and pepper and stuff that under the skin, then adorn your chicken with a few pieces of prosciutto and roast it all to crispy, cheesy, bubbly perfection; you will have entirely negated any of the health benefits of eating chicken, but you’ll have an awesome meal.

You are not wrong: that is not how your voice sounds in real life. The video has your word enuniciation right but not the pitch. It is off somehow and a bit up and to the side of your real voice.

It’s not your voice…it’s the sound of scissors cutting through chicken bone that makes the hair stand on end. ;-)

I am a print designer for The Dayton Daily News newspaper in Ohio.

We have a Wednesday lifestyle story that includes a recipe for spatchcocked chicken.

At present, I have no photo showing what a chicken prepared this way looks like, but I found one associated with your site.

I am seeking your permission to use that photo in our newspapers, which also include smaller dailies in three nearby communities.

As someone interested in cooking, I really enjoyed your video on preparing the chicken.

I expect it will be on our dinner menu this Saturday.

Thank you for your attention to my request.

You’re free to use my photos, just please credit them to Jessica Spengler. Thanks!

Thanks Jessica, I can’t wait to try this with all my fresh herbs and ricotta stuffing under the skin tonight. Thought about lemongrass coriander ginger garlic and lime zest with a sesame oil baste.Served with Char grilled Asian greens broccolini asparagus with a ginger chillie and lime dressing. What do you think?? Ruby

That combination of seasonings sounds great, Ruby, let me know how it turns out!