Bread is a magical food. Thanks to the wonder of Saccharomyces cerevisiae—also known as baker’s yeast—a dusty pile of flour and a splash of water can be transformed into the staff of life itself: a crunchy, chewy, nutritious, versatile, and delicious loaf of bread. 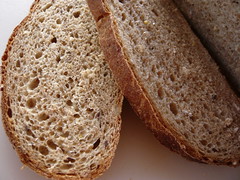 The very first recipe I wrote about on Principia Gastronomica was for an easy, no-knead wheat bread that promised success even for novice bakers. That recipe is perfectly fine, but with a little more time and effort, you can turn out a “proper” loaf of bread with a good springy texture and a superior taste. You don’t need any special equipment or expert baking skills, just a bit of patience and elbow grease.

Bread is a surprisingly forgiving food—it may be magical, but you don’t have to be a magician to make it. The cardinal sin is probably adding too much flour, which leads to a heavy, tough loaf. A good rule of thumb is one part water to three parts flour, though this will vary depending on the type of flour you use and even, to a lesser extent, on the weather. 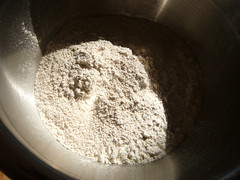 For the following recipe, you can use pretty much any flour you like; wholemeal, white, spelt, rye, and flour with grains or seeds in it will all work well. I generally use 2 cups wholemeal spelt flour and 1 cup white flour, but you can change those proportions as you like (just be aware that an all-wholemeal bread may be denser and less springy than a bread containing some white flour—but that’s not necessarily a bad thing).

For one large loaf of bread, you’ll need: 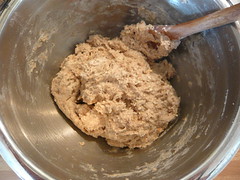 Mix the flour, yeast, and salt in a large bowl. Pour in the warm water and honey and stir everything with a wooden spoon until the dough pulls away from the sides of the bowl. If your mixture is way too sticky and runny, gradually add a bit more flour until the dough holds together in a loose ball.

Turn the dough onto a floured surface and knead it for as long as you have the energy (ideally about ten minutes, though I usually only make it to five). Add as little extra flour as possible; the dough should be slightly sticky but still kneadable. The dough will become smoother and easier to handle after you’ve kneaded it for a while. 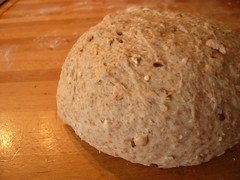 When you can knead no more, form the dough into a ball and let it rise in an oiled, covered bowl for an hour or longer. After the dough has risen, gently press the air out of it, shape it into a nicely rounded loaf, and let it rise again on an oiled baking tray, covered with oiled plastic wrap, for as long as it takes to get the oven good and hot (200C for a convection oven; about 220C/425F for a non-convection oven).

Uncover the dough, slash the top with a sharp knife if you like (it will look pretty and prevent the crust from splitting in the oven), and bake the bread for 30-40 minutes or until the crust is browned and the loaf sounds hollow when you tap the bottom—or, to be more accurate, when the bread’s internal temperature reaches roughly 95C/200F (stick an instant-read thermometer in the bottom of the loaf to check). 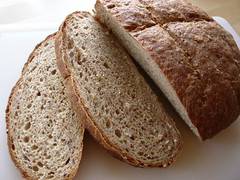 The cooking process continues even after you’ve taken the loaf out of the oven, so let the bread cool completely on a wire rack before you cut into it. Okay, okay, you can cut off a bit of the edge, slather it with butter, and devour it immediately if you must, but let the rest of the loaf cool all the way. Then use it to make a chunky ham and cheddar sandwich, or dunk slices of it into a thick vegetable soup, or—best of all—toast it and serve it with lots of butter and your breakfast condiment of choice: honey, jam, peanut butter, cinnamon sugar, marmalade, Marmite, Nutella... A day that starts with toasted homemade bread is bound to be a good day indeed. 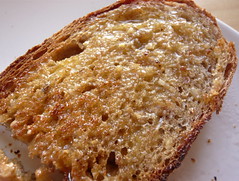 After moving to the usa from holland, we quickly discovered we had to do without ‘bruin brood’ (whole wheat dutch bread). So, we set out to make our own, just the way you described it and we’ve been doing it ever since 1990.

However, recently a lovely bakery shop opened nearby. http://www.beachpeabaking.com/ Now we do not have to bake our own bread all of the time. : )

I made your bread! It was the first bread I have ever made and it was so easy and delicious. Why have I been afraid of backing bread for the last 30 years? I used 2 cups whole wheat flour and one cup all purpose. Now I want to experiment with different combinations of flour. Thanks so much.