Friday night is homemade pizza night in our house. The toppings may vary wildly from week to week, but the pizza will almost invariably feature one of two types of tomato sauce. I’ve come to think of these sauces as my “winter” and “summer” tomato sauces because one uses tinned tomatoes and is ideal for heavier, thick-crust pizzas, while the other, made from roasted fresh tomatoes, suits the lighter, thinner pizzas I like in the warmer weather. 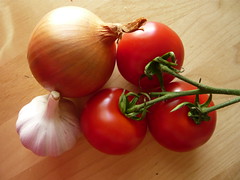 The winter sauce is an adaptation of my grandma’s tomato sauce for pasta, while the summer sauce was inspired by a variety of recipes for roasted tomatoes: a tomato confit with fennel seeds and lemon thyme by Sophie Grigson, a roasted cherry tomato sauce from the Amateur Gourmet, and a much-celebrated pomodori al forno recipe in Bon Appétit.

In the case of both sauces, the amounts given are just rough guidelines. You can use as much or as little garlic, onion, and herbs as you like. Even the cooking temperature and time for the summer sauce aren’t set in stone—I tend to just whack the oven on and roast the tomatoes until they look nice and squishy. Each of these recipes will make enough sauce for one large (36cm/14in) pizza, with extra sauce left over for dipping crusts or breadsticks. 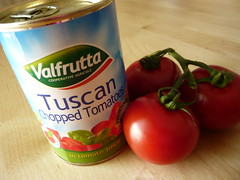 Purists may frown on the use of canned tomatoes, but I personally think that’s nonsense; good tinned tomatoes are far superior to bad “fresh” ones. Just look for good-quality chopped tomatoes in a thick juice. This is quite an American-style pizza sauce, rich and fairly sweet with a strong cooked-tomato taste. It’s the kind you can slather onto a pizza that will be topped with lots of gooey cheese.

Heat a splash of olive oil in a saucepan and gently sauté the onions over medium heat until they’ve softened (about 10 minutes). Turn up the heat a bit, throw in the garlic and stir it around for about a minute, then stir in the tomatoes, tomato paste, and oregano. Add sugar, salt, and pepper to taste and simmer the sauce for about 20 minutes, until it has thickened up. You can use it immediately or set it aside until you’re ready to assemble your pizza. This sauce is great with toppings like sausage and mushroom, ham and gorgonzola, or anchovy, caper, and olive. 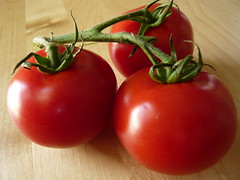 The herbal pungency of the fennel seed really brings these tomatoes to life, but if you absolutely can’t stand fennel, just leave it out. Also, while really ripe tomatoes are obviously the best here, this recipe will work wonders even for tomatoes which are either not quite at or just past their peak. 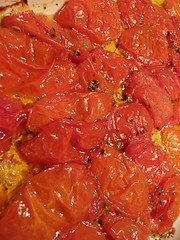 The tomatoes will still be quite juicy and olive oily. I like to thin a few spoons of tomato paste with the olive oil from the tomatoes and spread this onto the pizza dough first before scattering the roasted tomatoes over the dough. I like to imagine this makes a moisture barrier to prevent the dough from getting soggy, but that’s probably just wishful thinking on my part. In any case, try to drain as much juice and olive oil from the tomatoes as possible before putting them on the pizza; you can use the leftover juices for dipping your crusts into. This sauce is perfect for toppings like (uncooked) arugula/rocket and Parma ham, or a plain old pizza margherita with fresh mozzarella and basil.

I wish I’d read this before the weekend, when I attempted my first go at home made pizza (http://flic.kr/p/6Lm1gt). I think the sauce I made let it down, I simply used a carton of passata and simmered with garlic and olive oil for 10 minutes or so.

I’ve got 4 tomato plants on the go in the greenhouse this year, so will give this a try once they’ve ripened. With the summer we’re having this may be a while.

What sort of base thickness do you prefer? We prefer the thin-as-you-dare Roman style, but that does limit the amount of sauce and toppings somewhat.

My ideal base is super-thin and lightly crispy, but I seem to get better results when I make a slightly thicker, chewier base; my thin crusts often turn out tough. And, as you say, you can’t pile as much stuff onto a thin crust. :-)

This recipe rescues me again! (Now that tomatoes are finally ripening.)