Yesterday morning I read an article in the New York Times about hoarding—proper hoarding, where people amass such mountains of clothing, paper and other stuff that their houses become fire hazards and they’re forced to sleep on the floor because their beds have been buried by junk.

As I read it, I thought, “Gosh, that’s terrible, I could never live like that.” And then I glanced to my right and saw the corner of my kitchen which is overflowing with precarious stacks of old food magazines, pamphlets, leaflets, and recipes ripped from various sources, all chaotic and unusable in their disorganized state, and all ready to topple over at any moment and bury me in an avalanche of aspirational cooking.

It was at that point I had to admit I have a small hoarding problem myself: I hoard food publications. I have towers of recipe booklets, newspaper clippings and glossy food magazines collected from all over the place. Some of these actually get used for cooking—you can tell by the splattering on them—but the majority of them are in pristine condition, having been acquired, lovingly pored over once or twice, and then relegated to my “someday I’ll sort through all these and tear out the articles I want” pile. 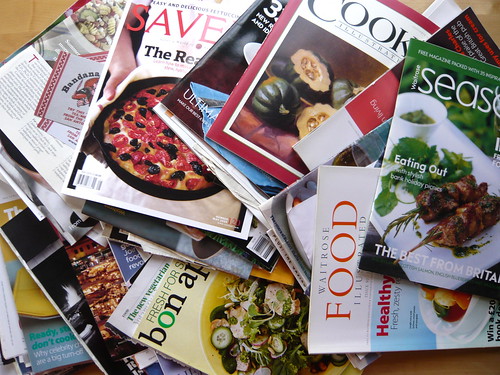 I suspect I buy food magazines like other people buy fashion magazines; you might not ever have the opportunity to wear the fashions you see (or you might not even really want to), but it’s fun to look at the pretty pictures and daydream anyway. And food magazines give me so much to daydream over: the big, juicy “food porn” photos; the mouth-watering descriptions of succulent seafood fresh off the boat and air-dried hams caressed by cool mountain breezes; the travel features with enticing accounts of nibbling warm pastries, piquant olives or pungent local cheeses while sitting on a sunny veranda in some exotic location; and, of course, the recipes—oh, the recipes, the hundreds upon hundreds of dinner parties, elegant brunches, summer barbecues, fireside feasts and romantic meals for two...

There’s so much potential in food magazines, so much promise. There’s so much to aspire to, basically, and not just as regards the food itself. The magazines make you aspire to a certain type of life, one in which you and your friends habitually sit around big, rustic farmhouse tables and chow down on homemade waffles with freshly-picked berries, or bright salads with herbs from the garden, or hearty roasts from the friendly butcher whose shop happens to be right down the lane from your charming cottage, next door to the artisanal baker, on the square where the farmers’ market is held every morning. They encourage you to think that simply by cooking up a quiche for brunch, you will have moved a step closer to a fantasy life consisting solely of lavish meals, amazing kitchens, and witty banter exchanged over glasses of the finest wine, a life in which your only care in the world is whether or not the soufflé will rise.

The thing is, I buy into it on some level. Obviously I don’t think that just making brunch is going to change my life—and anyway, as much as like the concept of brunch, realistically I’m never to going voluntarily rise at 8 a.m. on a Sunday to start cracking eggs. But the magazines and recipes open up a world of possibilities: things I could possibly eat, places I could possibly travel to, lives I could possibly lead. I suppose it’s quite escapist, but not necessarily in a negative way. It doesn’t make me feel bad about not being in a particular place or living a particular life, but it does spark a certain pleasurable yearning of a type which could eventually be transformed into action—i.e., I can’t visit that incredible restaurant now, but maybe someday I’ll be able to. 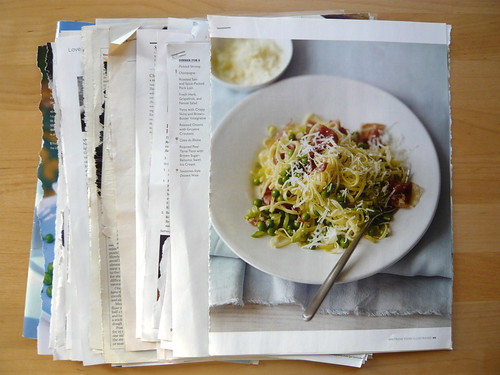 So, back to the hoarding issue. I can’t and won’t swear off food magazines. I take great pleasure in them, and I see no harm in curling up on the couch with a foodie publication to coo over the pictures and drool over the tasty-sounding recipes. HOWEVER, I have vowed that when I am done cooing and drooling, I will promptly take what I need from the magazine, file it in an easily accessible place, and then discard the rest. After all, an article hidden in a magazine buried under a pile of other magazines is totally useless, and after the initial “ooh! aah!” is over, there’s no reason to hang on to an entire magazine when you only really want one recipe from it.

So here’s to a new era of non-hoarding—of magazines, anyway. Now cookbooks, that’s another story entirely...

Gee…I wonder where you inherited this?

haha….you’re not alone…I had to go thru my magazines and pull out the recipes…and just the other day I realized I had a full drawer of recipes that I’ll never make….so I pared it down again to the ones that I really think I might make…maybe in another few years those will go away too

I am definitely a hoarder. I just love relaxing with a food magazine or a colorful cookbook. I cook but it takes me at least 3 hrs. to serve it; so I don’t cook unless I have to. My husband on the other hand can whip up delicious 3-course in an hour so he does most of the cooking. He’s very finicky about using the best ingredients and I get scoldings for getting the wrong item at the supermarket. He also has his own collection of cookbooks and that is whole different story. Going back to my issue, I really need help to minimize my collection. I’ve got 100 mags, books & booklets combined. I have been dwelling on what to do for a very long time. I’ll admit that they do take up space & are not being utlized on a daily basis since I don’t cook but I can’t bear to part with them. I have gotten rid of some items (about 10 of them) and that’s all I can ever part with. Any ideas out there? SOS!!!