Poor old cauliflower gets a bad rap. It’s generally boiled to within an inch of its life, then smothered with a pasty cheese sauce and slopped on a plate where it sits pallid and congealing, all of its goodness leached out, all of its potential denied. 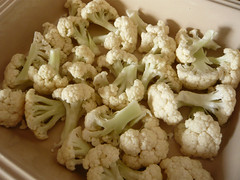 And yet, cauliflower can be so much more. The thing about cauliflower is that it’s innocuous enough on its own, but it really likes hanging out with some edgy characters: spicy curry powder, salty capers, sour lemons and smoky meats.

Also, while there’s nothing inherently wrong with steaming or boiling it, cauliflower really shows its stuff in the oven. Roasting cauliflower eliminates its wateriness, deepens its flavor and highlights its alluring nuttiness. It also gives you yummy, crispy, caramelized bits to snack on, which is always a good thing.

When we got a head of cauliflower in our veg box this week, I slipped it into the fridge next to a package of chorizo, looked at the two things together and thought, “Hmm...”. And thus the roasted cauliflower and chorizo dish was born.

Preheat the oven to 190C/375F. Spread the cauliflower florets in a single layer in a baking dish. 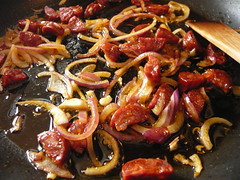 Heat a generous glug of olive oil over medium-high heat in a frying pan, then throw in the chorizo and saute it for about a minute, releasing its juices. Add the sliced onion and cook it with the chorizo for another minute or two, then toss in the garlic and saute it briefly until it’s fragrant.

Pour the onion and chorizo mixture over the cauliflower, being sure to get all of the tasty olive oil in there too. Season the cauliflower with a good grind of black pepper and a sprinkling of sea salt (but bear in mind that chorizo is quite salty). Toss everything together well so that the cauliflower is coated in the olive oil, then slip the tray into the oven and roast for about 25 minutes, stirring once, until the cauliflower is tender, browned and sizzling.

When the cauliflower is cooked, taste it for seasoning and squeeze a bit of lemon juice over it to brighten the flavors. Then tuck in! This recipe makes enough to serve two generously as a side dish, but it could also be served alongside other small dishes as part of a tapas spread. Or a single individual (ahem, such as myself) could sit down and devour nearly the entire bowl of it for lunch. That’s just how good cauliflower can be. 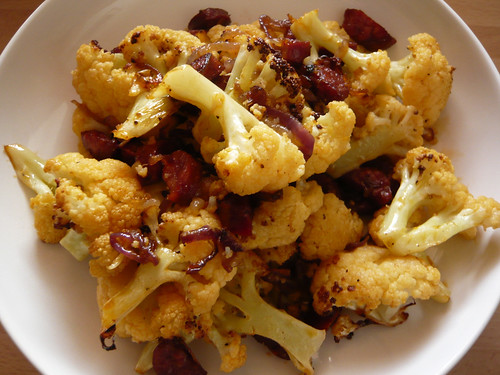 This will be my meal this weekend!

I found a great Chourico from portugal that would go fantastic in this recipe!

That looks fantastic! I think I’m gonna pick up some cauliflower tonight and give it a try.

I do this with broccoli & almonds: it’s great.

Someone jokingly suggested I eat chorizo and cauliflower on pasta for dinner. Not realising they were joking I found this recipe and had it on linguine. Actually delicious!

I knew I wanted to use both my chorizo and cauliflower for supper so I searched and found this dish. I made it tonight with no changes except I removed the onion and it was delicious! Thank you

Delicious. Mixed mine with pasta, a jar of instant pasta sauce and a can of tinned tomatoes. Then sprinkled grated tasty cheese on serving. A perfect winter dinner.

This is not as negative a review as I was initially going to post as the dish didn’t taste as bad as the errors in the recipe suggested that it would (although in truth it tasted just like boiled cauliflower would if covered with fried chorizo and onions — which would have taken 20% of the time to prepare).

The problem with this recipe is that it’s all wrong. Roasting unboiled cauliflower in 25 mins at 190°? Good luck with that — it took me over an hour, and 40 mins of that was at 210-230° fan-assisted. My gf almost fell off of her seat when I told her that was the recipe and said that I must have read it wrong because it wouldn’t cook — I didn’t and it didn’t; after the suggested 25 mins it was as raw as when I put it in.

Secondly, the quantities are way-off. Simply put, it’s not possible to cover a cauliflower (of any head-size) with half an onion and half a cup of chorizo. Try it — it won’t cover anything, and the cauliflower then won’t cook (which it won’t anyway if you follow this recipe). I followed this recipe and found that half-onion/half-chorizo quantity to cover one-eighth of the cauliflower, whereupon I had to re-dirty all the utensils I had washed up while frying the chorizo and onions to do it properly: twice the chorizo and 8 times as much onion.

In terms of taste it wasn’t bad, but there’s no need to waste time with the oven — you could do this in 20 with boiled cauliflower and a frying pan. I also wouldn’t waste time with this recipe — the name of the website and the reference to a ‘journal’ implies a degree of expertise — the actuality couldn’t be more different…

Sorry it didn’t work out for you, Dave, though I’m not sure why you feel the need to be so hostile about it.

The recipe reads &quot;Preheat the oven to 190C/375F.&quot; Did you set your oven at 190F by any chance? That would take a very long time.

Sounds and looks awesome! In this crazy time, it’s amazing that I actually have all the necessary ingredients on hand to make this…thank you!

Delicious! A winning combo. I sprinkled some paprika before roasting. I think the secret is breaking the cauliflower into small florets in order to cook in 25 minutes.