Asparagus season is upon us in England, and in my ongoing campaign to Stop the Unnecessary Boiling of Vegetables, I present to you not so much a recipe as a strong suggestion: instead of boiling or steaming asparagus, throw it in a griddle pan. 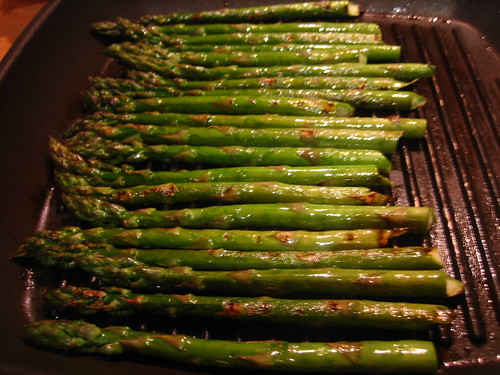 Some recipes for griddled asparagus would have you parboil the asparagus first. This is an unnecessary complication which, to me, defeats the whole purpose of griddling the asparagus—that purpose being to not boil it. Griddling alone is fast and easy, and it gives the asparagus a lovely chargrilled edge which really brings out their flavor.

All you need to do is snap off the woody ends of the asparagus and brush the stalks with olive oil. Heat a heavy griddle pan over medium heat, lay the asparagus in a single layer in the pan, and cook them for about ten minutes, rolling them around now and then, until they are tender enough to pierce with a fork. They should still have some bite to them when they’re done, and ideally they’ll have rather attractive (and tasty) grill marks on them too. 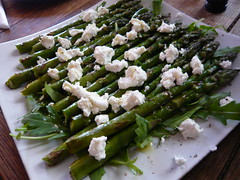 Griddled asparagus need nothing more than a pinch of sea salt and maybe a drizzle of extra-virgin olive oil, and then they will sit comfortably alongside a nice piece of lamb or some fresh grilled fish. But asparagus and cheese are close friends, too, so if you want to get swanky, you can scatter shaved parmesan or crumbles of goat cheese or feta over the spears. It looks pretty and it tastes great.

A vinaigrette is another nice accompaniment to griddled asparagus. Olive oil and balsamic will do the trick, but for something a bit different, try a Spanish-inflected dressing like the one I found in The New Spanish Table, a gorgeous cookbook packed with amazing recipes. To dress about a pound of asparagus, whisk together a tablespoon of good extra-virgin olive oil, a tablespoon of sherry vinegar (ideally aged) and half a teaspoon of honey. Season the dressing with coarse salt and pepper and toss the asparagus in it. It’s simplicity itself, but when you start with something as delicious as griddled asparagus, you don’t need to do a whole lot to make the dish shine. 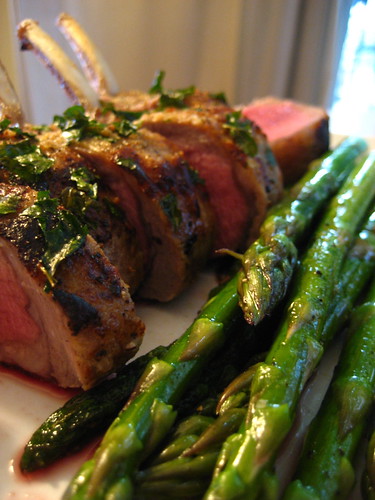