Sweet-and-sour is a combination more associated with Asian cooking than Italian, but even the ancient Romans were fond of these tongue-tingling tastes, and their culinary predilections live on in modern Italian cuisine. 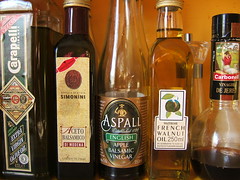 Italian sweet-and-sour mixtures—or agrodolce—are typically based on vinegar and sugar and can be used for everything from grilled vegetables and fried fish to hearty game stews. The contrasting tastes add an interesting dimension to otherwise simple dishes. For instance, griddled zucchini is nice, but griddled zucchini sprinkled with fresh herbs and dressed in a garlicky agrodolce is vibrant.

The same applies to the humble pork chop. When pork chops are thick and juicy and fatty and flavorsome, you don’t need much more than salt, pepper and a hot grill to make them into a tasty meal. But to elevate them from “tasty” to “awesome” with minimal effort, I recommend trying the recipe for sweet and sour glazed pork chops published last month in Saveur magazine. 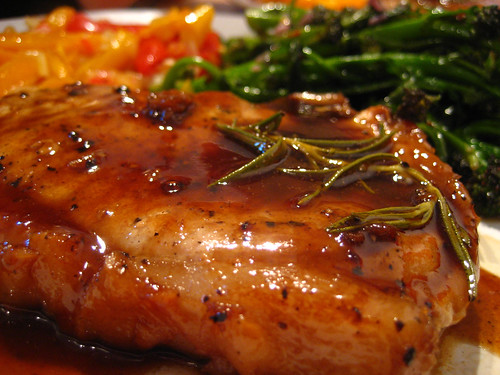 As originally written, the Maiale in Agrodolce recipe calls for cooking Frenched pork chops (i.e. with the fat trimmed from the bone) on a barbecue while basting them with the sweet and sour glaze. Since it’s not quite barbecue season here—and we don’t have a barbecue yet anyway—I cook the chops in a frying pan and it works just fine. Also, instead of making the glaze separately, I whip it up in the frying pan I’ve used to cook the chops. That way you get to scrape up the yummy brown bits from the pan and you don’t have as many pots to wash. Also, don’t worry about the “Frenched” bit; a little fat on the bone never hurt anyone.

Rub the chops with olive oil and season them well with salt and pepper. Heat a heavy frying pan over medium-high heat and cook the chops until they are nicely browned on the outside and every so slightly pink on the inside (it will probably take about 15 minutes total). 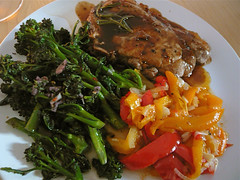 Remove the chops from the frying pan and keep them warm while you make the agrodolce sauce. Lower the heat to medium, then add the vinegar, honey and rosemary to the pan. Simmer this mixture until it is reduced slightly—and don’t lean over the pan to take a big sniff of the sauce unless you want boiling vinegar fumes to sear your sinuses (I speak from experience). Whisk in the butter and watch the glaze turn thick and glossy—it’s like magic!

Finally, pour any juices from the resting pork chops back into the glaze, remove the sprig of rosemary, and drizzle the agrodolce over your waiting pork chops. With a side of stewed sweet peppers and maybe some spicy, garlicky broccoli, you’ll have a simple but impressive meal to remember.

Incidentally, this sweet/tart sauce with its savory hint of rosemary is delicious on duck breasts as well. Give it a try—your taste buds will thank you.