I’m in Arizona for Christmas. In amongst all the usual festive fare like turkey and mince pies, I thought it would be nice — in true coals-to-Newcastle fashion — to cook up a Southwest dish. 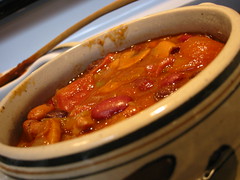 Well, that’s the official reason. The truth is that I only really know how to cook one dish: chili. But this is chili with a twist. It’s vegetarian chili. In fact, it’s vegan. Just the thing for when your vegan friends come to visit.

I’ve been perfecting this recipe over the last few years. That’s a polite way of saying that I never make it the same way twice. I usually throw in some new ingredient each time I make it. Sometimes it works, sometimes it’s less successful.

Here’s the basic list of ingredients for a nicely sized pot of chili for two or three people:

I approach chili just like curry - I want to start from a good thick paste. If the paste is good, it’s hard to go wrong.

Get a good heavy pot. If you have a casserole pot from la creuset, now is the time to use it. Heat up some vegetable oil in the pot. Don’t be stingy with the oil. I know it’s not healthy, but you can’t skimp on the oil when you’re making a chili. Get it warm on a medium heat.

Add about two tablespoons of cumin to oil. Again, that may seem like a lot but cumin is the key to getting that Southwest taste. If you can find some pimenton, sprinkle some in. Throw in some chili powder, preferably chipotle chili powder, maybe a teaspoon or so depending on how spicy you want your chili to taste or how red you want it to look.

The spices will turn the oil a nice dark colour. Don’t be alarmed if things get smoky at this stage - that’s perfectly normal. 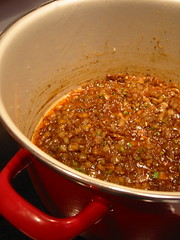 Now add chopped onions - lots of chopped onions. Sauté them for quite a while so that they get nice and soft, maybe ten minutes or so.

This is the point where you can personalise the paste. I like to add some dark chocolate. Break it up a bit before adding it, but it will melt anyway.

You could also try brown sugar or maple syrup. They’re both good for caramelising the onions and adding a nice dark colour.

Throw in some chopped garlic and chopped chili pepper. You might want to deseed the chili pepper if you don’t want to add too much spice.

If you want to add some whiskey or beer, now’s the time. Splash it in and cook it off.

Now that you’ve got a good paste going, it’s time to use it to coat your vegetables. Don’t go crazy with the number of different types of veg you use. I tend to stick to just mushrooms and peppers, chopped into bite-sized pieces. Stir them around, get them all covered in the paste and let them cook like that for a while.

Once the veggies are nice and soft, throw in the chopped tomatoes. Turn up the heat until the mixture starts to bubble, then turn the heat back down again. 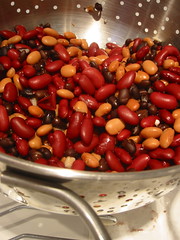 Drain your tinned beans. You don’t have to use kidney beans. Pinto beans or black beans are great too. Try using a mixture. Whatever beans you choose, be sure to wash them first to reduce the ahem gaseous side-effects.

Throw the beans into the pot. Get it all bubbling again and then turn down the heat. Put the habeñero pepper (also called a scotch bonnet) in the middle of the chili. Push it down to partly submerge it but don’t mix it: you’ll need to remove it before serving. In the meantime, it will be releasing its heat into the chili. 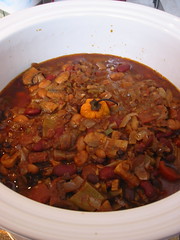 And now you must be patient. The chili should simmer for at least an hour or two, preferably longer. If you can make it a day ahead of time, it always tastes better after being reheated.

Serve up the chili with little bowls of extras: grated cheese, chopped onions, and sour cream. I like to eat the chili with tortilla chips. Jessica favours saltenes. Or you could just use a spoon.

Oh, and you might want to add salt: you’ll notice that I don’t use any but that’s just personal preference. I figure there’ll be enough salt on the tortilla chips.

If you choose to make the chili fairly spicy, I recommend accompanying your serving with a nice glass of cold milk. That’ll put out the fire.

Great recipe! I’ll try it and let you know how it pans out :)

Spanish smoked paprika can be found in most Sainsburys here in the UK and is available in ‘Sweet’ or ‘Hot’ varieties. In most cases I’d stick with the sweet version, as the hot version ‘goes up to 11’ and I’m someone who’s into their chillies.

Looking forward to giving this recipe a whirl, nice one!

I may be biased, but I have to say that this is some of the tastiest chili around. It’s got a combination of sweetness, spiciness and smokiness that just can’t be beat.

I love the chipotle chilies in it - they really add a good, deep flavor. I’ve never been able to find canned chipotle chilies in adobo sauce in the UK, but UK residents can order whole and crushed dried chipotle chilies from http://www.chillipepperpete.com/ . The crushed ones in particular are very handy to have around, and one jar of them lasts forever (they’re hot!). If you happen to live in Sussex, Chilli Pepper Pete can usually be found at the local farmers’ markets (Lewes, etc.), and he always has a stand at the Brighton Food Festival market as well.

wa… look so good, I need to try making it

Delicious - cooked it for (meat-eating) friends the other night and it went down a storm. We took Jeremy’s advice and bunged loads of chocolate & beer in, and it was fantastic.

As you say, it’s one of those things that’s even better the next day, so next time I’d definitely try and be less crap and make it in advance!

Finally! Somewhere in the UK that sells "non-standard" chillis. I’ve been looking for somewhere like chillipepperpete for months - thanks for the tip

Looks like a great recipe and one I can’t wait to try out.

I can also vouch for Chili Pepper Pete. His smoked chipotle chili mix is fab.

I ordered a huge quantity of dried chiles from http://www.coolchile.co.uk/ years ago and I am still ploughing my way through, but really recommend them if you like your heat smokey.

Instead of boiling these stews for hours I use a pressure cooker, but perhaps in this case I will get out the le creuset I was given recently as it is stipulated in the instructions ;)

I dutifully followed the advice to use a lot of veg oil and it worked out superbly: the added veg and mix of beans are great ideas and the chocolatey sauce is divine. I found it had a slightly wagamama style saturated taste though, so next time it’ll be back to olive oil. Although I used 70% cocoa I think it needs a splash of vinegar or lemon to balance the sweetness.

If your looking for Chiles I can recommend http://www.mexgrocer.co.uk

Compare their prices to the other sites (like I did) and you’ll find that MexGrocer offer a larger range and lower prices.

What’s more the site is run by a really nice couple she is from Mexico and he is from England. A nicer pair of people you will ever meet.

I stumbled upon your recipe yesterday in hopes of making a really killer vegan chili. SUCCESS! I used dry sherry as the flavor-enricher, and also added baking chocolate, corainder, dry cilantro leaf, and fake meat (texturized vegetable protein chunks). This was one of the best chilis I have had. Thank you!

Wow what a great chili. I tried it with chocolate and whiskey and it was a hit. Thank you for a super recipe.