Updated February 2013: The Greys has since changed hands and, at the time of writing, is no longer serving food.

It’s easy to fall into a rut when you go out to eat. Obviously, you want to keep going back to the places you know are good, but sometimes you wind up never going to the places that you’ve heard are good just because they lie beyond some imagined urban Rubicon, beyond which you think you’ll never find your way back home. 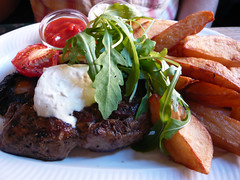 Somewhat less dramatically, it was sheer laziness which kept Jeremy and me from ever making it to The Greys pub when we still lived across town in Hove. Despite being known as a great music pub, a great Belgian beer pub and a great food pub, we never summoned the energy to experience these things for ourselves. But as soon as we moved into Brighton proper, we resolved to get to The Greys as soon as possible.

Reliable sources had informed us that The Greys serves up the best steak in Brighton. Really good steaks are hard to come by here (I contend that Jeremy actually cooks the best steaks in town), so we were excited but also wary, having been disappointed too many times before by tough, under-seasoned, poorly cooked pub steaks.

Our wariness was misplaced. The rib-eye steak at The Greys—served with a generous portion of hand-cut potato wedges, a big grilled mushroom and grilled tomatoes—is scrumptious. It’s juicy, it’s tender, it’s cooked properly, it’s seasoned perfectly, and it has such a deep flame-grilled taste that Jeremy and I wonder if some chemical trickery is involved in the cooking (Liquid smoke? Or maybe they really do have a flame grill in the kitchen...). I think it rightfully deserves the title of Best Steak in Brighton (Except Maybe for Jeremy’s).

There is more to The Greys than steak, however. The regularly changing menu caters to seafood lovers and vegetarians as well, and while I’ve only indulged in meaty dishes myself, I’ve spied on other people’s plates of sea bream and risotto balls and thought they looked very good indeed. 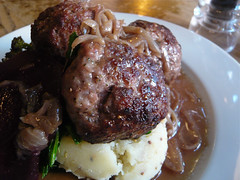 As far as meat goes, I can confirm that the chef at The Greys knows how to cook a duck breast to perfection (crispy and salty skin, juicy pink meat, flavor-packed jus), and even a humble plate of meatballs with mustard mashed potato is elevated above the ordinary thanks to the quality of the ingredients used and the skill that goes into preparing them.

You can just pop in to The Greys for a pint of beer and a snack if you want, or you can enjoy a full three-course meal with a bottle of wine. The starters are comfortingly traditional and local: potted shrimps, South Downs partridge salad, pig’s ear goujons (that’s right, pigs’ ears—breaded and fried until they’re golden and crispy on the outside, tender and tasty on the inside). The desserts are all homemade with an elegant flair, and they even pair well with the fruity Belgian beers on offer; we finished our first meal at The Greys with a slice of orange and passionfruit cheesecake washed down with a sweet passionfruit beer, which was an unusual match made in heaven. 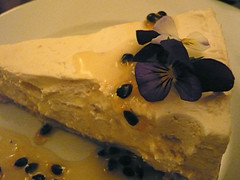 The Greys serves restaurant-quality food in pub surroundings. Maybe some people would call that a “gastropub”, but to me The Greys feels like a normal local pub which just happens to serve great food. It’s comfortable, unpretentious and affordable. It’s also very popular, so if you’re intent on having dinner there, you’d probably be wise to book a table. Food is served Tuesday through Thursday and on Saturday, and they do Sunday roasts as well.

Whether you live in Brighton, in Hove, or somewhere else entirely, I recommend making the steep trek up Southover Street for a pint and/or a meal at The Greys. It took Jeremy and I ten years to get there ourselves, but now that we’re hooked, we’re certainly making up for lost time.

I’m still on the hunt for the perfect steak in Brighton. Next stop: The Greys. Thanks for the lovely review, Jessica :)