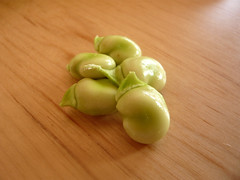 In the spring and summer, England is the land of the legume. Between June and September, English markets offer a parade of glorious greenery, from sweet fresh peas and runner beans to fine French beans and mangetout.

The broad (or fava) bean is one of the more intriguing and challenging veggies available in the summertime—intriguing to me because I didn’t know what a fava bean was before moving to England (Hannibal Lecter notwithstanding), and challenging because they can be time-consuming to prepare and their skins have a bitterness which may not appeal to everyone. But they are also one of my favorite fresh beans, so they appear frequently on my plate when the days turn warm. 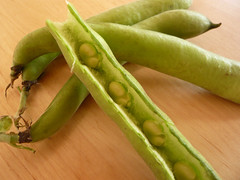 The broad bean is an emerald green gem sealed in a milky green skin and nestled in a thick pod. You can eat really young broad beans whole, pod and all, but you’re unlikely to find such tender specimens in your average shop. When broad beans are somewhat older but still small, you just need to free them from their fuzzy sleeping bags and drop them into boiling water for a few minutes before consuming them skins and all.

But the older and bigger the beans, the tougher and more bitter the skins, so as broad bean season draws to an end, you’ll have to invest more labor in making them palatable. This means podding them, boiling them as above, draining them and then slipping them out of their skins individually (either just by squeezing them or by nicking the skin with a sharp knife and then squeezing them). Yes, it takes a bit of time if you’re cooking a lot of beans at once, but it’s also a comfortably meditative act: nick the skin, squeeze the bean, nick the skin, squeeze the bean... 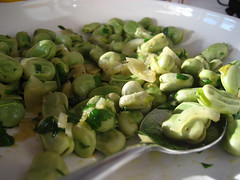 Once the beans are cooked to tenderness, they will play nicely with a variety of other ingredients. You can keep it simple—a good dousing with butter or olive oil, maybe a twist of lemon—but I really like combining broad beans with something salty to balance out any bitterness.

Try tossing freshly cooked broad beans with feta or goat cheese and a glug of olive oil; the warm beans will make the cheese go creamy and slightly melty in a most pleasing way. Salty cured meat will achieve the same effect—think chorizo, pancetta or bacon sizzled until crisp, maybe with some onion or shallots as well, and then mixed together with the beans. And a handful of soft herbs (mint, basil, parsley) is never a bad idea either. 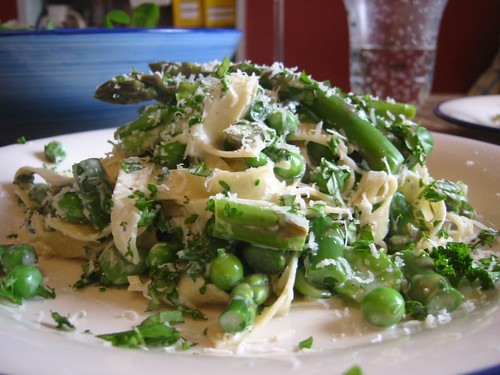 If a plate full of broad beans alone is too much for you, try combining them with other seasonal veggies. They pair wonderfully with peas, they add brilliant color to a salad made with new potatoes and sun-blushed tomatoes, or you can throw them into a light primavera sauce for pasta alongside asparagus, parmesan and tons of fresh herbs.

Broad beans aren’t as readily available in the States as they are here in Britain, so if you see some at a market or in the store, I’d encourage you to snap them up and give them a try. All the podding and peeling is worth it for the plate of bright green summer goodness you’ll have in the end.