I don’t generally like to post recipes here on Principia Gastronomica which are not my own. I’ll make exceptions for recipes which aren’t widely available (like Valentine’s pork chops) or which I’ve modified to some extent (like sweet and sour pork chops), but just pointing to a recipe on another site and saying “Hey, go make this!” feels like a cop-out. 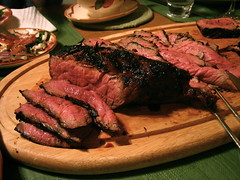 However, some recipes are simply too good and too deserving of greater exposure to not write about, and one of those is the recipe for grilled flank steak with rosemary from Bon Appétit magazine in 1995.

My parents have used this marinade recipe for years, and their London broil (incidentally, that Wikipedia picture is their London broil) cooked outside on the barbecue to juicy, chargrilled perfection is probably the meal Jeremy and I request most often when we visit them. Here in Brighton, we don’t (yet) have a grill and don’t have ready access to flank steak either, so I use the marinade on regular steaks which I sear quickly in a griddle pan.

I think one secret to this recipe is the honey which, when it hits the hot grill, adds a fantastic caramelized depth to the already flavor-packed marinade. Combined with soy sauce, rosemary, pepper and garlic, you wind up with an umami-tastic taste which is sweet, savory, pungent and utterly addictive. I mean, just try to stop eating this steak once you’ve started.

To make enough marinade for a couple of good-sized steaks with plenty left over for drizzling and dipping, you’ll need: 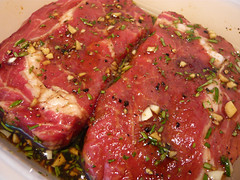 Mix the marinade ingredients together in a glass or plastic dish, add the steaks and coat them well, then cover them and let them marinate for a few hours.

When you’re ready to cook the steaks, take them out of the marinade and brush off some of the garlic and rosemary so it doesn’t burn in the pan. Sear the steaks in a hot griddle pan or frying pan until they’re rare to medium rare, then remove them from the pan and let them sit a few minutes.

You can either serve the steaks in one piece or slice them thinly across the grain like you would with a flank steak. And if you want to use the leftover marinade as a sauce, bring it to a boil and simmer it for a few minutes. It’ll be super-concentrated and just right for drizzling over the cooked steak to add an extra flavor punch.

Note: The original marinade recipe calls for salt in addition to the soy sauce which I (and most of the reviewers on Epicurious) find a bit excessive. If you’re that way inclined, you could throw a pinch of salt into the marinade—just be aware that smaller steaks will absorb more of the marinade than a big slab of flank steak, and if you boil down the marinade afterwards, it’s going to be really salty. But hey, taste is a matter of taste, if you know what I mean. 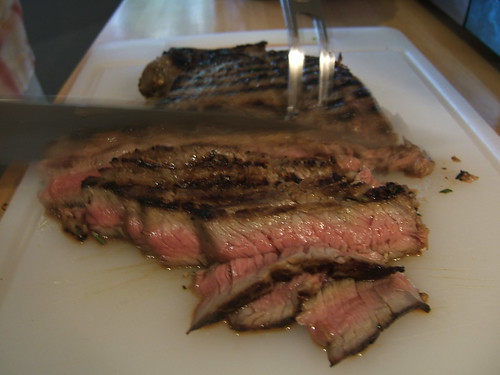 looks great! Will be trying it this week some time…just saw a documentary about how rosemary combats the effects of TCA which is a reaction that happens when cooking red meat on the grill on high heat. TCAs increase the risk of cancer (especially prostate cancer)…so this recipe may be delicious AND cancer-fighting!

looks great! Will be trying it this week some time…just saw a documentary about how rosemary combats the effects of TCA which is a reaction that happens when cooking red meat on the grill on high heat. TCAs increase the risk of cancer (especially prostate cancer)…so this recipe may be delicious AND cancer-fighting!

Thanks, Corina - considering how much we’ve been using the grill, that’s good news indeed!

Tried it today with a rump steak, absolutely scrumptious! I did reduce the marinade in a saucepan - on tasting it, decided to sieve out the chopped rosemary (still a bit too ‘dry/obvious’ but the resulting drizzle ‘jus’ was delightful!

Tried it last weekend using larger quantites for a large quantity of steak and we doubled our sale of steaks..

this has to be the first marinades i tried as a teen cook. It was so easy to make and turned out great. Thanks for the marinade

I marinaded this recipe to eye fillet steak, the sous vide for 1 hr at 54 deg Celsius. Seared on a pan for 30 sec each side to finish, so tasty! Thanks for the recipe

Thanks will try it out