Zucchini is easy to take for granted. The name itself is one thing I always took for granted; as a kid, little did I know that outside of North America, the sturdy Italian zucchini morphs into the fancy French courgette. 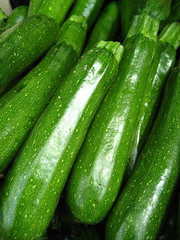 The second thing I’ve always taken for granted is that zucchini is delicious. Zucchini has always been one of my favorite vegetables, and I attribute this primarily to the fact that, in my family, we ate zucchini in one way and one way only: bathed in garlicky olive oil and dusted extravagantly with parmesan cheese.

Only now do I realize that this was perhaps somewhat unusual. It appears many people I know were forced to choke down blandly steamed or (gasp!) boiled courgette, and an equal number of people associate zucchini with student-cafeteria-style vegetarian mush.

The poor zucchini clearly falls into the same camp as the leek: a wonderful vegetable in its own right, but one which is often misused or relegated to playing a bit part in dishes which don’t gain anything from it. Zucchini is delicate and watery, so it needs minimal processing and a careful choice of complementary flavors in order for it to shine. 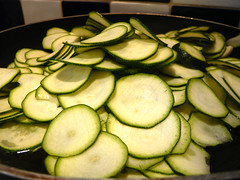 That’s not to say it can’t stand up to herbs, spices, vinegar or even chilies. These ingredients just need to be used judiciously to bring out the best in this squash. Also, unless you’re trying to pad out your meal, I don’t see the point of throwing chopped up zucchini into a generic stew or, god forbid, a bowl of chili. It will probably go squidgy, it will probably not taste of anything, and it will probably not make zucchini-haters change their mind about this wonderful summer vegetable.

But maybe my family’s simple sautéed zucchini recipe will.

For two people (you can easily scale this up, and the amounts aren’t critical anyway), you’ll need: 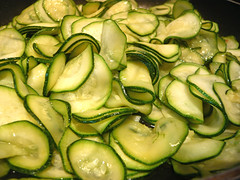 Heat the olive oil and garlic cloves in a large frying pan over medium heat for several minutes until the garlic becomes fragrant; it shouldn’t sizzle or turn brown, it should just start to smell really good. Add the sliced zucchini and the salt, and stir the zucchini to coat it in the olive oil.

The zucchini I ate as a kid was stewed in the olive oil until it was disintegratingly tender, but these days I sauté it more lightly for a shorter period of time. If you want the stewed option, cook the zucchini over the medium heat, stirring occasionally, until it’s very soft and mellow. If you want the zucchini to hold its shape and some of its bite, let it cook for only 10 minutes or so, stirring occasionally, until it’s just starting to go translucent (you can bump up the heat if you need to, but you don’t want to brown the zucchini, you just want to soften it).

When the zucchini is cooked to your liking, serve it alongside some juicy lamb chops, a golden roast chicken or an assortment of other Mediterranean veggies, and top it with lots of freshly grated parmesan. Oh, and you can pick out the whole garlic if you like, but you’ll be missing out on a tasty treat. 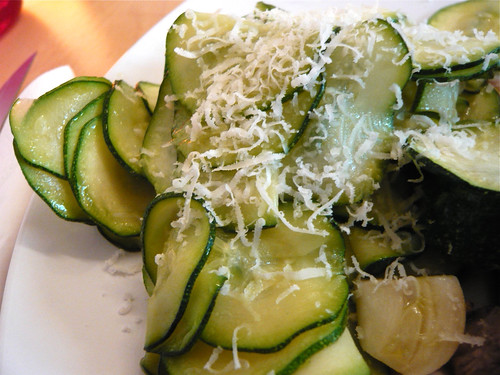 Loved the basic idea. I spiced it up with some Mushrooms, Pepper and Thyme. Makes a delicious side-dish then, so thanks for the recipe.

Making this right now! Hope it turns out well :) My family is loving Zucc’s this summer and today we’re cooking indoors today, usually something we grill outdoors on the BBQ… great idea!!

Recipe of Roald Dahl: courgette/zucchini in olive oil - baked for a while, add garlic cloves to taste and (lots) of thyme, then lemon juice - let simmer. Eat with spaghetti and parmesan.

another way to do this is to use a vegtable peeler and cut the zucs lengthwise with the peeler stop when yu get to the seeds, they are too mushy.