There are a few things to be said about chicken breast (like it’s relatively healthy if you’re crazy enough to not eat the skin), but you certainly can’t say that it’s the juiciest, tastiest cut of meat around. In fact, I tend to avoid it; I much prefer a nice bit of leg from a chicken that’s had the chance to run around outside and do chickeny things before winding up on my plate. 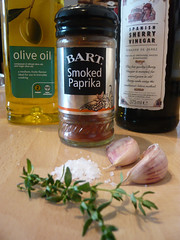 I should qualify that: you don’t “gotta” marinate them. You could stuff them with goat’s cheese, wrap them in parma ham, drizzle them with olive oil and bake them, and trust me, they’ll turn out fabulous. However, if you want something slightly more towards the not-going-to-give-you-a-heart-attack end of the scale - but which still tastes great - then a marinade is the way to go.

Marinades infuse meat with flavor, make it more tender and keep it moist. This particular marinade has a Spanish flair, with pungent smoked paprika and a dash of sherry vinegar for tenderization and tanginess. To guarantee that the chicken stays juicy during cooking, it’s nestled into a bed of fresh tomatoes and roasted red peppers which soften into a kind of sauce for added texture and taste on the plate. 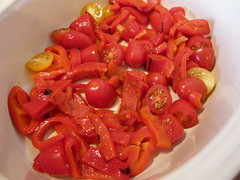 Mix the first seven ingredients in a glass or plastic dish, then add the chicken breasts and coat them really well with the marinade. Cover the dish and let it sit in the fridge for an hour or two.

When you’re ready to cook, preheat the oven to 180C/350F. Scatter the tomatoes and peppers in the bottom of a baking dish large enough to hold the chicken, sprinkle over some salt, pepper and more fresh thyme, then take the chicken breasts from the marinade bowl and snuggle them into the vegetables, making sure the skin isn’t covered. Give the exposed skin a good seasoning with salt and pepper as well, then drizzle a smidgen of olive oil over the whole lot and get it into the oven. 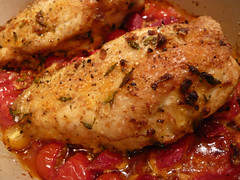 In 25-35 minutes, the vegetables should be soft and sizzling and you should have chicken which is crispy on top and cooked through but juicy inside (I cook chicken breast to an internal temperature of 160F/71C). Serve the chicken with the saucy peppers and tomatoes, a side of rice or new potatoes, and a big green salad.

*Note: I really, REALLY recommend buying chicken breasts with the skin on. Crispy chicken skin is one of the world’s greatest culinary pleasures, and the number of calories you’ll save by eating skinless chicken breasts can’t possibly make up for the amount of flavor you’ll lose. Even if you cook the chicken with the skin on and then take it off before eating, you’ll have eked more flavor out of the meat than if you’d started skinless to begin with—and flavor is what it’s all about. 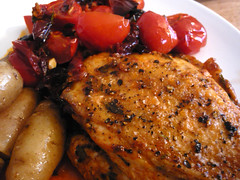