Pasta with broccoli and nduja 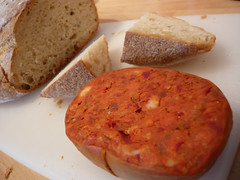 When I mentioned “creamy, spreadable nduja” in a post several months ago, I had never actually tasted the Italian salami myself, only read about it. So when I spotted a roll of the chili-flecked sausage at a farmer’s market recently, I snapped it up.

Nduja is famed not just for its unusual consistency, but for its searing heat. In its native Calabria, it’s often just spread on bread and eaten as is, a fiery snack to be washed down with a tough red wine. But as the Calabrian woman who sold it to me said, nduja is also a great addition to sauces and stews, adding a spicy, porky base note which perfectly complements tomato-based dishes in particular. 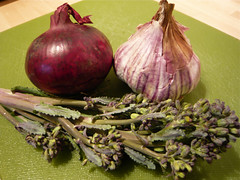 Broccoli and red chili is a classic Italian combination, so for this pasta dish I paired some hot nduja with bitter purple sprouting broccoli, both of which contrast nicely with the sweet pop of cherry tomatoes. Strong greens like kale would work well here, too, or for a gentler flavor you could use regular broccoli instead. The sauce (such as it is) comes together in the time it takes to cook the pasta, making it ideal for whenever when you need a fast weekday meal or a piquant late-night pick-me-up.

Cook the pasta in the usual way, as they say (i.e., boiling water, salt). 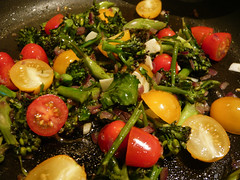 As the pasta is cooking, heat the olive oil in a frying pan over medium heat and saute the onion for a few minutes until it starts to soften. Toss the chopped broccoli into the pan and cook it for about 5 minutes until it begins to get tender (purple sprouting broccoli will take longer than regular broccoli—you can add a splash of wine or water to help it along).

Add the garlic and tomatoes and let the tomatoes cook down for a few minutes, then drop a tablespoon or more of nduja into the pan. As you stir the nduja into the other ingredients, it will disintegrate in the heat, leaving behind an unctuous spiciness. Season the sauce to taste with salt and pepper, then stir in the cooked pasta and loosen the sauce with some of the pasta water if necessary.

Serve the pasta with a dusting of salty pecorino or parmesan cheese and a gutsy red wine. 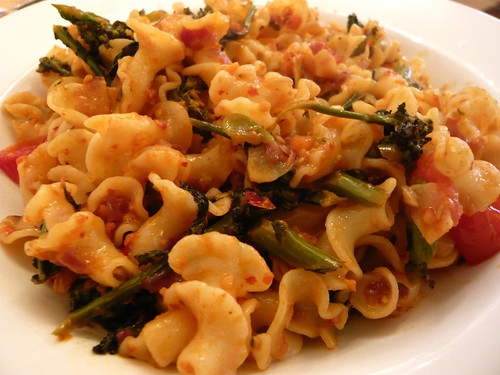 N.B. Incidentally, I’ve since used nduja on a pizza with roasted red peppers and it was fabulous. Dot teaspoonfuls of nduja over the top of the pizza before you cook it and they’ll turn into crispy little bundles of spicy goodness in the oven. Buonissimo!

Now I really must find nduja! How did you come about a Calabrese lady?

She was at our local farmers’ market with lots of different sausages, cheeses and pastas. Unfortunately, I can’t remember the name of the Calabrian food importer she was representing, but if she’s there again this weekend, I’ll post the name here!

This looks and sounds a lot like the Spanish Sobrassada, normally made on the island of Mallorca. It comes in both hot (picante) and not hot (dulce) varieties, and can be eaten spread on bread or as an ingredient in more elaborate meals.

It’s quite common to have it accompany fried eggs, or hot, with melted cheese. It’s also common to place a small spoonful in the middle of the local meat pies (normally made with pork and peas). An interesting combination of sweet-and-sour is to mix it with honey and either use it as a dip or spread it on bread, depending on the consistency.

Thank you for the heads up - Paulo and I love it!

Also the Crema Rossa is lovely :)