So, like any canine-toothed omnivore unafraid to embrace your primal food urges, you like to gnaw on a hunk of cow every now and then. You are a friend of the filet, a lover of the loin, you appreciate both the flash-fried minute steak and the slow-cooked shin, the traditional Sunday roast and the spicy BBQ brisket. 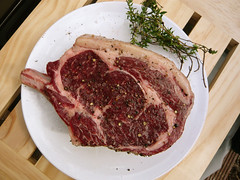 But where do you turn when you want something more than a sirloin but less than a full-on standing rib roast? Something that’s marbled with delicious fat but doesn’t have to be cooked for hours? Something that can be served as easily for a fast mid-week dinner as it could for a lavish dinner party?

You turn to the côte de bœuf.

A côte de bœuf (also known as a cowboy steak) is basically a thick, bone-in rib steak. I’ve become obsessed with the côte de bœuf; no other piece of beef seems to cut it anymore. I dream about it, my mouth waters just thinking about it. The obsession began last year at the Anchor & Hope in London, where Jeremy and I shared a slow-cooked rib that was crusty and salty on the outside, silky and rare on the inside, and so fabulously moreish that we polished off every last scrap of the massive thing even though I knew I’d have meat sweats for the rest of the night. 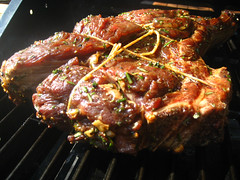 Since then, we’ve bought many bone-in rib steaks to cook at home, and whether we’ve seared them quickly on a hot grill or cooked them long and slow in the oven (or both), they’ve never failed to deliver the beefy goods. If you get the right rib, the meat will have all the tenderness of prime rib, all the gutsiness of a T-bone, all the elegance of a Chateaubriand, and all the awesomeness of all the most awesome steaks you’ve ever had.

Getting the right rib isn’t hard, but it helps to know a bit of bovine anatomy and butcher’s terminology. The anatomy bit is easy: a cow has 13 ribs, and ribs 6-12 are usually what you would use for a rib roast. The ribs closer to the shoulder (the “large end” in the US or “forerib” in the UK) are bigger, fattier and somewhat less tender than the ribs closer to the rump (the “small end” in the US or “wing rib” in the UK). The forerib also happens to be extremely flavorful and about half the price of the wing rib, so we usually get a forerib (if you’re in the States, just look for a bone-in ribeye and you’ll be fine). One thick-cut rib (about 1 kg or 2 lbs) will feed two generously, often with enough leftovers to make an outstanding sandwich the next day. 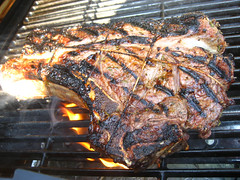 To get the best out of a beautiful piece of meat like this, you don’t need to do a whole lot to it. Just take it out of the fridge about an hour before you plan to cook it so that it comes to room temperature, and give it a very generous seasoning with coarse salt and cracked black pepper. If you want to get fancy, you could rub the rib down with garlic and rosemary smashed to a silky paste with olive oil, but there’s no need to go beyond that. Full-on marinades like the rosemary marinade for steak are just gilding the lily; you buy a beef rib for the taste of beef, not the taste of marinade.

As for the cooking itself, you want high heat followed by low heat for a crusty outside and evenly cooked inside. In our house, this means firing up the BBQ—summer or winter, rain or shine—and searing the rib over a high flame for 5 minutes on each side, then moving it to a preheated oven (100C/210F) for around 35 minutes or until a meat thermometer reads 130-135F/55C for medium-rare. You could cook the rib entirely on the grill by starting it on the direct heat and then moving it to indirect heat until it’s done, or you could skip the BBQ entirely and sear the steak in a heavy skillet before moving it to the oven. Either way, let the steak rest for a good ten minutes after it’s finished cooking, then cut it into not-too-thin slices and present it on a big platter, swimming in all its lovely juices. 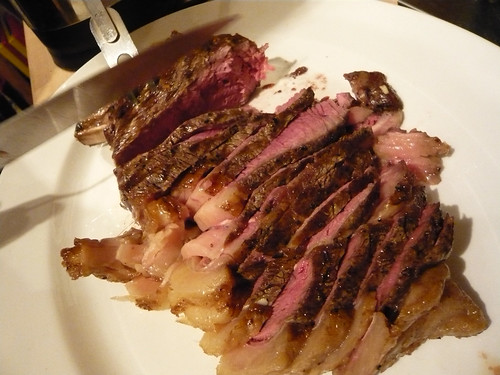 Those ample juices mean you probably won’t be needing sauces or condiments, but there’s nothing wrong with putting a dollop of horseradish, mustard or chimichurri/salsa verde on the side of your plate to swish your steak around in. A simple herb butter can add extra punch at the table as well: mash 1 clove of garlic with a big pinch of sea salt, add some chopped herbs (thyme, rosemary and parsley are great) and combine this with just enough softened butter to hold it together. If you do this in advance, you can shape the butter into a log and refrigerate until needed. If you don’t do it advance, it will taste just as delicious as it melts over your perfectly seasoned, perfectly cooked, perfectly delicious rib of beef.

Must. Cook. This. I forwarded this to my wife who by coincidence was listning to NPR’s Fresh Air at the time. They had an interview with Mark Bittman who recommends putting the meat uncovered, on a wire shelf, in the fridge for two to four days. It apparently develops a crust and looks revolting, but tastes amazing. Here’s a transcript of the show: http://www.npr.org/templates/transcript/transcript.php?storyId=139846788

Ate this 3 times in france this week whilst on holiday - Cote de Boeuf is the best!

I have just cooked a Cote de boeuf for Sunday roast following your above advice and cooking instructions. It was outstanding! Bloody amazing! You were right season only with salt and black pepper. Thank you! I’ve been complemented so much on this dinner, All because of you! Thank you Kim xx

You can get a similar effect to the keeping in the fridge for 4 days, by super salting each side for about 1 hour. And I mean lots of salt, flaky sea salt is best. Don’t panic! After 1 hour wash it all off and dry with kitchen paper, then you will see that the surface has become tough and dry looking. Slather with oil, sprinkle with pepper and cook as normal.

My style of cooking would be to cook the meat “sous vide” to 55C/131F for an hour, then take it out, pat the outside with paper towels, give it a heavy treatment of salt-n-pepper, then grill it in a roaring pecan fire for 90 seconds per side.

Done this way, there is no juice loss and thus you’re not required to “rest” the steak, though we always do anyway (as we use those ten minutes to cook asparagus and other veggies on the grill.)

If I had a sous vide machine, I would totally do that. Someday! :-)

My Father ran the meat department of a small town grocer for 30 years. He always said that a rib steak wasn’t only your best value, it was the best steak.

Would cook this by sous vide method for the best results.

I finally bought a sous vide device at the end of last year, and I’ve been sous vide-ing everything in sight ever since, mostly with great results. We had a sous vide cote de boeuf for the first time a few weeks ago, and we had a traditionally roasted one last night, and I have to say - I actually preferred the traditionally roasted one, to my surprise. I felt like the dry oven concentrated the beefy flavor a bit more and also made the fat a more pleasant consistency. That said, I’m still very much getting the hang of sous vide times and temperatures, so I need to experiment some more! (Also, my pot was just barely big enough to sous vide an entire cote de boeuf, so I need to work on that aspect too…)

Wood b-b-q-ed its simply the best most delicious cut of meat in the world. It NEEDs to be blue or rare at most. It will look raw inside but HOT. It required constant monitoring on the fire and testing for temp (knife in the middle brought up to the lips for temp testing)…simply mind blowingly tasty and moist. A french family friend does this for us every time we go on hols to see them on the coast. Simply local sea salt and black pepper seasoning and left out of fridge overnight to acclimatise. DO NOT OVERCOOK. ‘Eat with your mouth not your eyes’ is the advice as it looks raw inside…but its not. Sensational as only the french know how