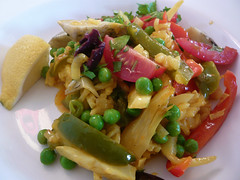 Like most people, I suspect, my concept of the “Mediterranean diet” has long been limited to a very specific part of the vast Mediterranean—namely, the arc from Spain in the west, up to Provence and the French Riviera, across Italy, and down the coast of Greece to Crete. But the Mediterranean encompasses so much more, everything from Morocco and Egypt in the south, to the Balkans, Turkey and the Levant in the east.

This latter region in the far eastern Mediterranean is the object my current culinary obsession, an obsession that can be traced back largely to one person: Yotam Ottolenghi. If you’re in the UK, you’ve probably heard of Mr. Ottolenghi; he’s had regular columns in the Guardian, he has cafés and best-selling cookbooks, and he’s even been on TV.

It was through the Guardian that I first found him and became intrigued. I gradually amassed a ragged, spattered collection of recipes ripped from the weekend magazine—recipes for multi-vegetable paella, saffron cauliflower, chermoula eggplant—recipes that looked as good as they sounded, and tasted as good as they looked. The intrigue turned to infatuation when Plenty came out, with its gorgeous cover photograph of pomegranate-strewn eggplants. And the full-blown obsession kicked in when I finally bought a copy of Plenty for myself and started cooking—and loving—every single recipe in it. 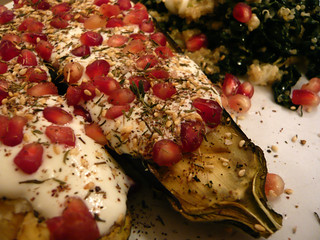 I can’t overstate how much Yotam Ottolenghi’s food has changed my palate, my cooking and my spice cabinet. I’ve become a real flavor junkie, throwing fresh herbs at things with abandon, roasting seeds and filling up little jars with spice mixes, keeping a steady supply of pomegranate molasses in my fridge. His salmon steaks with spicy tomato sauce have transformed how I think about caraway, his couscous with butternut squash prompted me to buy, use and actually enjoy eating tarragon, and the fact that we’ve got rows of fennel bulbs planted in our little garden out back is due in no small part to him, too.

Ottolenghi has also changed my culinary map of the world, revealing a spectrum of tastes and textures and colors that I hadn’t really experienced before, the tastes of Jerusalem, Beirut, Damascus. But where do you start if you want to dip your toes into the eastern Mediterranean? 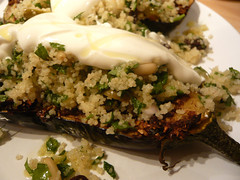 I can’t claim to be any sort of expert as I’m just in the process of discovering these cuisines myself—but I think I’d start with sumac. It’s not a hugely aromatic spice in and of itself (at least, the stuff we get here in the supermarket isn’t), but the citrus zing and russet hue of the dried sumac berry lend a characteristic look and flavor to many dishes from this part of the world. It’s lovely as a garnish for a dish of hummus or yogurt or dusted over a crunchy Lebanese salad, and combined with coarse salt it makes a fabulous crust for roasted lamb or chicken. Use it wherever you want lemony tartness combined with a bit of texture.

Sumac really shines in combination with other herbs and spices, such as in the spice blend known as za’atar. Za’atar adds a crunchy kick to everything it touches. Different countries make different versions, but you can’t go wrong with a basic mix of toasted sesame seeds, thyme, oregano, sumac and a pinch of salt. Scatter it over dips and salads, serve it as a dip in its own right with pita bread and olive oil, mix it with feta cheese, moisten it with oil and brush it onto pizza dough before baking for a fancy flatbread, or just sprinkle it on crackers smeared with cream cheese for a quick snack. 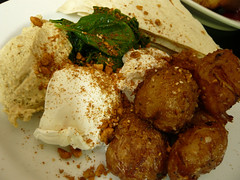 For a nutty Egyptian spin on the spice blend, mix up a batch of dukkah. Dukkah, like za’atar, comes in many different guises, but you’re likely to find nuts, a variety of seeds and a bit more spiciness than you get with za’atar. Whatever blend you use, it will add amazing fragrance to all sorts of dishes. I first encountered dukkah in Sydney, where it was sprinkled over poached eggs and spinach for a savory breakfast, but it pairs beautifully with beans and chickpeas, salty cheese, rice and grains, roasted vegetables... To be honest, there isn’t much that couldn’t be improved with a dash of dukkah (or za’atar, for that matter).

Dried spices are great, but if Ottolenghi has taught me anything about kicking up the flavor quotient in food, it’s this: get jiggy with the fresh herbs. And I don’t just mean parsley (as wonderful as it is), I mean things like mint, cilantro/coriander, lemon thyme, fennel and dill. 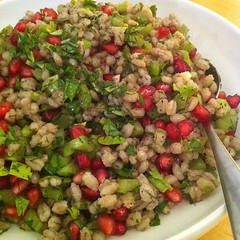 Dill has probably been the biggest surprise for me; the herb I formerly associated solely with bland poached salmon and borscht turns out to have been living a wild life in the warm Mediterranean sun. Its sweet pungency perks up leafy and grainy salads alike, and it combines beautifully with other herbs like mint and parsley to add an elusive anise note to dishes. I enjoyed one of the more unexpected uses for dill the other night in the form of Ottolenghi’s barley and pomegranate salad. As I was making it, I couldn’t imagine how barley, celery, allspice, dill and pomegranate seeds could work together—but once I started eating it, I couldn’t stop. The leftover salad was as crunchy, chewy and scrumptious the next day as it had been the night before, so it’s definitely one for a picnic.

Speaking of pomegranate, here’s a hot tip: If you want to instantly make any dish you cook look like a meal fit for a sultan, sprinkle pomegranate seeds over it. With their ruby-red sparkle and juicy crunch, pomegranate seeds are the ultimate in culinary bling. I think Yotam Ottolenghi can take a lot of the credit for popularizing pomegranate in the UK, and I would like to thank him profusely for it—particularly since it means I can buy ready-to-eat packs of fresh pomegranate seeds instead of having to tackle the formidable fruit myself (hey, we all have our culinary breaking points). In the summer, I sprinkle pomegranate seeds over bowls of mango, crunchy granola and yogurt for breakfast; in the winter, the seeds glitter amongst cubes of golden roasted butternut squash. And year round, you can’t help but feel happy when you see pomegranate on the plate. I have a lot of sympathy for poor Persephone—it’s awfully hard to resist the pomegranate’s gem-like allure. 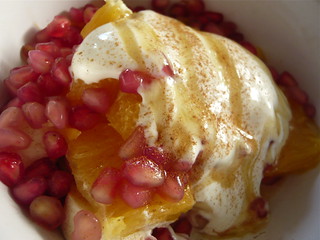 If you want to take pomegranate to the next level, seek out—or make—some pomegranate molasses. This sweet-tart syrup is another ingredient you can easily slip into your everyday cooking for a fresh twist on familiar foods. It makes a great base for marinades (lamb, chicken and pork all love pomegranate), salad dressings or even cocktails. It’s also wonderful in stewed vegetable dishes like sweet and sour eggplant, tomatoes and chickpeas, which makes a fantastic summer supper when paired with quinoa or bulgur and a leafy, lemony salad (maybe sprinkled with sumac—or za’atar—or indeed pomegranate seeds).

Beyond that, I would highly encourage you to seek out some Ottolenghi recipes if you haven’t already. They’ve opened a door onto a whole new world of food for me—a world of bright flavors, bold colors, intoxicating aromas and flat-out foodie excitement—and they might just do the same for you.

Hi there. I found your blog while looking up broad beans and how to make them less bitter. Interestingly I was doing this after making the latest recipe out of Ottoleghis new book,Jerusalem, which had some incredible recipes in this week’s Guardian magazine! I then scrawled through your other pages and found your page on none other than Ottolenghi! I too am a food lover and while I have had an ongoing love affair with cakes and baking and the beauty of making something that is not only a work of art or sometimes whimsical,but that tastes even better than it looks, food is something that I and my husband are totally fascinated by and we have a collection of cookbooks the amount of which sits comfortably between the sublime and the ridiculous! I too have to thank Ottolenghi with changing my palate and his marinated rack of lamb from his earlier book is one of my all-time favourite recipes. I have really enjoyed your blog and was moved to comment on it after strange coincidence that led me here in the firs place! I look forward to reading many more of your fascinating pages in the future. Congratulations! Gill