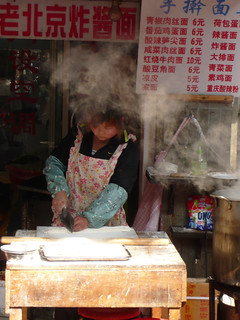 Our trip to Shanghai a few years ago was a real culinary eye-opener for me. It’s not that I didn’t realize China has a vast array of cuisines, it’s just that I’d never been exposed to them myself. Much like my knowledge of Indian food is pretty much limited to Westernized takeaway fare, my knowledge of Chinese food didn’t go far beyond wontons and fried rice.

Within a few weeks of returning home from Shanghai, my kitchen cupboards were filled with Sichuan peppercorns, chili-garlic paste, fermented black beans and pickled vegetables, and my head was filled with memories of meltingly soft red-cooked pork, crunchy lamb and cumin kebabs, blistering Sichuan hotpots and ethereal soup dumplings. Shanghai changed my concept of Chinese food and it changed my cooking. 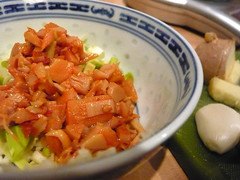 The first thing I wanted to make when we got home was red-cooked pork, and my quest for a recipe for this sticky, unctuous dish led me to Diana Kuan’s Appetite for China blog, which immediately became my go-to source for Chinese cooking inspiration. So when I was recently struck by a craving for that numbingly spicy Sichuan peppercorn heat to fend off the cold, damp misery of England in February, I swung by Appetite for China and found not only the perfect recipe but also a very exciting competition.

To participate in the competition—or the “Chinese New Year Virtual Potluck”—you just have to cook one of seven recipes from Diana’s new Chinese Takeout Cookbook and blog about it by February 24, 2013. All participants (with a US address) get a copy of the book—and since I was planning to make one of Diana’s recipes anyway and buy the book anyway, I jumped at the opportunity and started gathering ingredients. 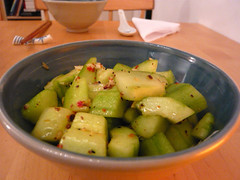 I went a bit crazy, as usual, and cooked not one but two recipes from the competition list: dan dan noodles and Chinese marbled tea eggs. I also put together a Sichuan cucumber salad (because I could eat that all day long) and a vegetarian mapo tofu to use up some dried mushrooms I had sitting around. Oh, and I made some stir-fried broccoli in oyster sauce, too. Yes, this was all just for two people. Yes, we were very full after dinner.

I had made the cucumber salad and mapo tofu several times before, so I knew those dishes would be great (one cool and spicy, one hot and spicy, both terribly addictive). The tea eggs and noodles were new to me, however, so it was with excitement and a bit of trepidation that I embarked on those recipes. 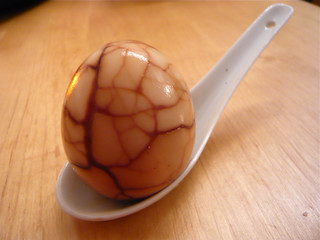 For my first attempt at tea eggs, I was really pleased with the result. I let the eggs simmer for two hours (filling the house with a wonderful aroma) and then they sat in their broth for a bit while I prepared the rest of dinner. When I peeled the first egg at the table, I was delighted to see lovely marbling all over (particularly since I had kind of haphazardly bashed the shells and wasn’t sure I’d get the right effect).

The taste was surprisingly mild—just a hint of star anise and soy—and it was a refreshing counterpart to the other rich and spicy dishes we were eating. One of the chilled leftover eggs made a tasty on-the-go snack the next day, and I chopped up another one to throw into some fried rice the day after that. You get a lot of bang for your buck with these eggs. 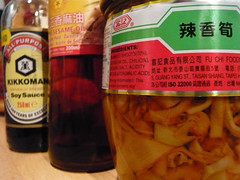 The dan dan noodles were the star of the show at dinner, however: springy Chinese noodles topped with lightly crisped ground meat in a vinegary sauce infused with the floral heat of Sichuan pepper. I though there was no way we would make it through the whole bowl of noodles considering how many other dishes I had made—but by the end of the meal we were scraping the bowl clean.

I did make a few adjustments to Diana’s recipe: I couldn’t get a hold of the Sichuan preserved vegetable, so I tossed in some chili pickled bamboo shoots instead; they didn’t have the same crunch as pickled mustard stem, but they added a nice briny hit of flavor to the noodles. I also used a baby leek instead of the scallions, so the garnish was slightly more oniony than it would have been otherwise. 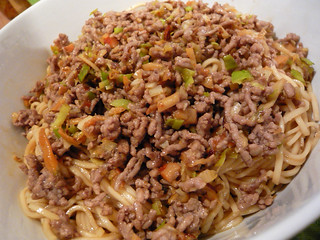 But the most dramatic change was that I used ground lamb instead of beef or pork. I substituted the lamb because that’s what I had languishing in the freezer, but in retrospect I like the lamb aspect for three other reasons: 1) “lamb dan dan” is nicely alliterative, 2) the lamb dishes I had in China were some of the most exciting and surprising to me, so I enjoyed being able to use lamb in yet another interesting way, and 3) the lamb actually works really well in this dish because it stands up beautifully to the spicy chili, the deep umami of the soy sauce and the tang of the black vinegar and pickles. Lamb dan dan doesn’t really seem to be a “thing”, but I think I’m going to make it a “thing” because it tastes great.

So, our Chinese New Year dinner was a terrific success, and my exploration of Chinese cuisine continues thanks to Appetite for China. If you’re a newcomer to making Chinese food at home, like I am, or you’re looking to recreate some of the dishes you know from Chinese restaurants or takeaways, I recommend checking out Diana’s blog and her Chinese Takeout Cookbook. You might surprise yourself with the delights you’ll soon be producing in your kitchen. 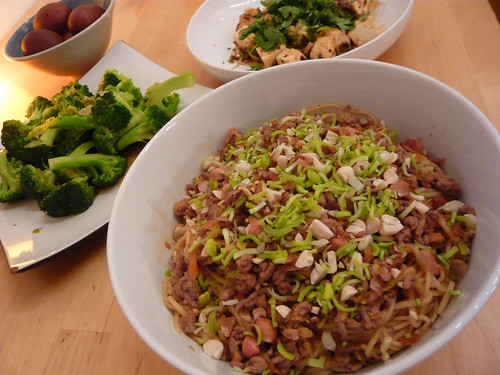