One of the first recipes to enter my collection many years ago, when I was living in Germany and just getting my footing in the kitchen, was a recipe for what is known in our house as Moroccan bean stew. Now, let’s get this out of the way: I’m pretty sure almost nothing about this dish is authentically Moroccan—not least in that the recipe as it was originally written called for garam masala as its primary seasoning, and garam masala is not from North Africa (though North Africa has similar spice blends—but we’ll get to that). 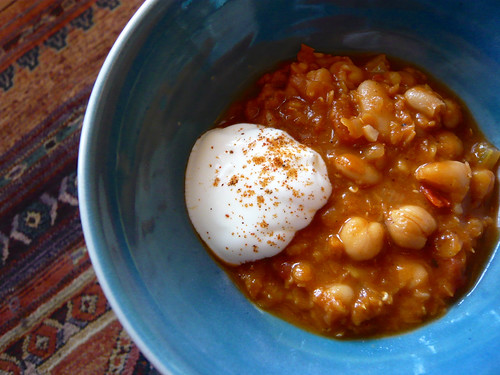 “As it was originally written” is a bit of a conundrum for me, too, because I’ve had this recipe for as long as I can remember. It’s scribbled on one side of a ripped, wrinkled, stained sheet of notebook paper. There are Latin exercises on the other side of the paper, and since I haven’t studied Latin since, oh, the 1990s, we’re talking a good decade’s worth of Moroccan bean stew in my house. I must have found the recipe on the nascent Information Superhighway—and a bit of recent Googling uncovered it again on Allrecipes, where it goes by the name of “Moroccan lentil soup” but is otherwise exactly the recipe I have written on my scrap of old paper.

Of course, the recipe on the scrap of paper isn’t the recipe I actually make anymore, though the bare bones of it are the same: red lentils, white beans, chickpeas, tomatoes, spices. Those ingredients alone will give you a decent soup, and anything you add beyond that will give you a really good soup. If onions are the only other vegetable you have on hand, then just use onions. If you’ve got carrots and celery, throw them in. Diced bell peppers or fresh chilies work too. Vegetable broth adds good flavor, but water will work in a pinch. And the garlic and ginger are nice but not essential. 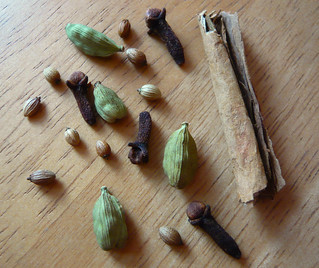 What is essential is the seasoning—and this brings us back to garam masala and the other spices. Garam masala is an Indian spice mixture which includes things like cumin, cardamom, black pepper and cloves, though its composition varies from place to place and from cook to cook. Other regions of the world have comparable blends: in some parts of the Middle East you find baharat, in other parts you find advieh, and in North Africa you find ras al hanout (not to be confused with this guy). I always used garam masala in this recipe until I ran out of garam masala one day and substituted baharat instead—and it tasted almost exactly the same. I actually like baharat more now because the blend I use has a lot of paprika in it which gives the stew an appealing terra cotta hue.

It is perhaps odd that the original recipe calls for both the spice blend as well as many of the spices you would find in that spice blend, but honestly I never really questioned it until I started documenting the soup for this site. I imagine that instead of the extra cumin and cardamom you could just use more of your chosen spice blend—or, if you’re really serious about things, you could make your own spice blend just the way you like it. This tends to be a “whip it up fast and leave it alone” kind of dish for me, so I use whatever I have on hand and add more spices to taste as needed.

For one big pot of soup, you’ll need:

Heat the olive oil over medium heat in a large, heavy pot and sauté the onions (and carrot/celery/pepper if you’re using them) for about 10 minutes, until they’re starting to get soft. Add the garlic (and optional ginger) and stir for a minute, then add the spice blend, cumin, cayenne and cardamom pods and stir until they’re fragrant (only a minute or two).

Mix in the tomato paste, then tip in the tomatoes, chickpeas, beans and lentils. Douse everything with the broth, bring the stew to a boil, then lower the heat, partially cover the pot and let the stew simmer until the lentils are tender, adding more liquid if necessary; you can add considerably more liquid to make it more soupy or leave it as it is to make it more stewy. It should only take about half an hour for the red lentils to cook, but the stew can continue to simmer beyond that if you like—or you can turn off the heat and let it sit for a bit, then reheat it when you’re ready to eat (it just gets better).

You can puree some of the soup if you like to get a creamier texture, but I find that the red lentils usually thicken it up nicely all on their own. Also, the stew itself is vegan, but if you yourself are not, I recommend serving it with a dollop of tangy yogurt on top, and maybe some warm pita breads on the side. 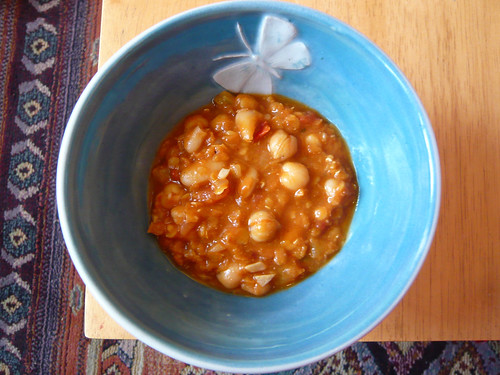 Finally, an odd side story: Not long after I had my wisdom teeth out, Jeremy and I were invited to a barbecue by German friends of ours. I still wasn’t in any condition to eat solid food, so I brought a tub of Moroccan bean stew—pureed to within an inch of its life—and sat at the picnic table slurping soup while everyone around me tucked into grilled sausages in crusty German rolls. I’m not saying I wouldn’t have liked a sausage, but even in those less-than-ideal conditions, this soup tasted good.