There’s certainly nothing wrong with a bubbling dish of straight-up macaroni and cheese. But there’s also (almost) nothing that can’t be improved with the addition of Spanish chorizo. Armed with that knowledge, I bring you: chorizo mac and cheese. It’s soft, it’s cheesy, it’s smoky, and it’s a proven crowd-pleaser.

My go-to baked macaroni and cheese recipe is from Mark Bittman’s How to Cook Everything. It’s a fairly grown-up version of the dish, with bay-infused milk and good, sharp cheese. Bittman’s version is great as it is, so I’ve only tweaked the basic recipe a little to get the chorizo (and some onion) in there. Of course, there’s nothing stopping you from using your own go-to mac and cheese recipe, if you have one—just fry the chorizo a bit so you can use the fat as part of the base for your cheese sauce, and you should be good to go. 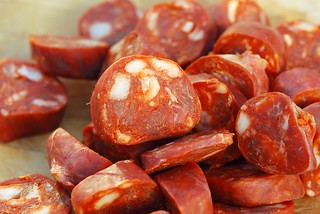 Heat the oven to 200C/400F and butter a baking dish big enough to hold your pasta and sauce (I generally use a deep 29cm/11in oval dish). Boil a large pot of generously salted water and cook the pasta until it’s almost but not quite done (it should still have a tiny bit of bite). Drain the pasta, reserving a cup of the water, and set it aside.

While the pasta is cooking, warm the milk, bay leaf and garlic in a small pan over medium-low heat until it just starts to bubble at the edges. Turn off the heat and set the milk aside as well. (Note: You could also just heat the milk and aromatics in the microwave to save some stovetop space. No one will judge you.)

In yet another pot (I know, I know), melt the butter over medium-low heat, then gently sauté the onion in it until it starts to soften. Add the chorizo and fry it for a few minutes until its delicious fat is released. Stir in the flour and continue stirring while the flour cooks for another few minutes. 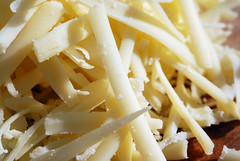 Now comes the exciting bit: Pick the bay and garlic out of the milk, then pour the milk slowly into the flour, onion and chorizo mixture (which should still be on the heat), whisking like a maniac to prevent floury lumps. It may hiss and seize up to begin with, but keep stirring and soon the milk and flour will become smooth. Then sprinkle in the grated cheese and stir until it’s melted. Turn off the heat and check for seasoning—chorizo is salty, but you may want to add a pinch more salt and some black pepper at this point.

Mix the chorizo and cheese sauce into the cooked pasta, adding a bit of the pasta water if the mixture seems too dry (I like creamy mac and cheese, so I tend to err on the side of more liquid rather than less). Check the seasoning again, then pour the mac and cheese into your baking dish, top it with a few handfuls of breadcrumbs, a good sprinkling of smoked paprika, and a dusting of salt and pepper, and then get it in the oven. Bake it for 15 to 20 minutes, until it’s lightly browned and bubbling. Then serve it right away with something green on the side (peas, salad, etc.) to balance out the rich, cheesy, chorizo-y awesomeness.

[Pictures of chorizo and grated cheese courtesy of Victor Bayon]