Somewhere amongst the artifacts of my childhood—the crayon drawings, the macaroni art, the saved spelling tests—there is a piece of posterboard from the late 1970s with a picture of me sporting a gap-toothed grin and surrounded by a list of things all about me, including my age, my favorite book (Dr. Seuss’s Sleep Book, of course) and my favorite food: tookoo. 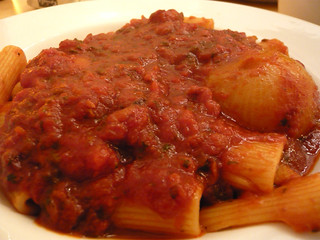 Growing up, I never questioned the fact that my favorite food was something no one else had ever heard of. I never thought to wonder where the strange name might have come from, or whether other people also enjoyed beef stewed in tomato sauce on a regular basis. It was just a thing my Oma made and my family ate, like eggplant parmesan, or zucchini with tons of olive oil and parmesan cheese—the culinary legacy of my Italian(-American) ancestors.

When I grew up and started to take a historical interest in the formative foods of my childhood (red beans and rice, pilau), I quickly ran into a brick wall when it came to researching tookoo. I knew it was a dish stemming from northern Italy or possibly southern France (based on my family’s background), but its precise origins were hazy, and the name was a complete mystery. No one in my family knew where “tookoo” had come from, nor did any of the various Italian people I asked over the years. Even the internet was of no use to me—at least, not initially. In the early days of the web, I would intermittently scour food sites for some hint as to what “tookoo” might mean, and though I did find plenty of recipes for similar tomato-based pot-roast dishes, I didn’t find an explanation for the name. 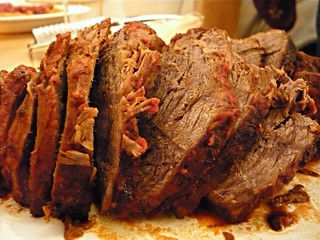 Until, one day, I did. As I trawled through italianfood.about.com, I came across the recipe for Beef or Veal Tocco—Tocco di Carne, and suddenly everything fell into place: Tocco, with an o so closed it almost sounds like u (tucco)—I actually gasped when I read this. “Tocco is a Ligurian term [my Italian ancestors came from Genoa, the capital of Liguria] that means meat sauce, or ragí¹, and is an example of frugality: The meat is gently stewed. The resulting sauce is used to season pasta, rice, or polenta, while the meat serves as a second course with the vegetable of choice.” There it was, after years of wondering: a culinary and family mystery explained. Even now, I do a little happy dance when I think about it. I like figuring things out.

I also like making—and love eating—tookoo. The dish is very dear to me, tied up as it is with happy memories of my childhood and my beloved Oma, who would patiently let me “help” her make it (and never scolded me for sneaking spoonfuls of the sauce as it bubbled away for hours on the stove). When I was still very young, she would pour two cans of peeled tomatoes into a big pot and let me crush them with an ancient potato masher. She would put her hand over mine and we would chop parsley together with a red-handled mezzaluna in a shallow, scarred wooden bowl. I can still hear the sound of blade knocking against the wood, and to this day the smell of freshly chopped parsley reminds me of my Oma. 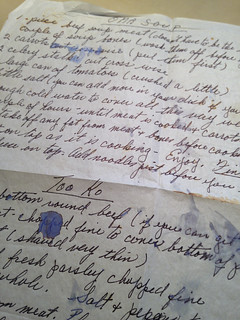 My copy of the tookoo recipe—crumpled and stained as it is—was written out for me by Oma many years ago. Most of the recipes I’ve found online for tocco call for several more ingredients than Oma ever used: wine, rosemary, celery, mushrooms, broth... One of the recipes at italianfood.about.com says that tocco is “a hearty sauce, made with the obligatory olive oil and complemented by the ever rarer use of bone marrow or veal fat.”

Now, olive oil was used for a lot things in my house growing up, but one thing it was never used for was tookoo. Oma’s recipe is simple and streamlined, but it is also very specific: the fat to be used for browning the meat is suet (as Oma explains in her notes to me—written when I was still living in Germany—“Germans give suet to birds so you’ll have to ask butcher for it, otherwise use butcher fat cut up small + remove pieces as it melts. Leave enough fat in bottom of pot so you can brown meat well”). In fact, when I first tried to make tookoo myself, I lazily skipped the hard-to-find beef fat and fell back on olive oil instead, and while I suppose I made a perfectly fine tomatoey pot roast, I did not make tookoo as I know it. Ever since then, I’ve stuck firmly to whatever beef fat I could get my hands on (or even, in a pinch, the boxed Atora suet that you find among the baking ingredients in UK supermarkets). It makes all the difference. 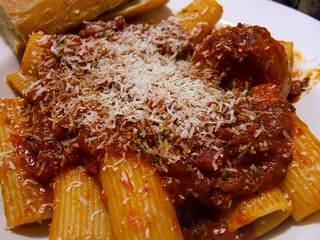 My mom says that when she was growing up, Oma would make the tookoo and my Opa would make homemade tagliatelle to go with it; my Uncle Harold remembers visiting their apartment in Brooklyn for Sunday dinners and “the whole bed would be covered with home-made macaroni and it looked like a bedspread.” But when I was growing up, after my Opa had passed away and my Oma was living with us, rigatoni was the pasta of choice, so that’s my canonical pasta shape for this dish. Any pasta shape will do, really—just coat it well with the rich sauce, add a sprinkling of parmesan cheese, and serve the sliced beef on the side, along with a green salad dressed in oil and vinegar.

I realize that for most of the people who see this recipe, tookoo will be nothing more than meat, tomato sauce and pasta—a humble but tasty dish, maybe a nice thing to cook on a lazy Sunday. For me, though, it represents childhood, family dinners, family history, grandmotherly love. It is everything I love about food, and everything that makes cooking and eating so important to me. Even if I had never found out what tocco was, “tookoo” would have remained precious to me.

Use a heavy pot in which the meat and whole onion will fit rather snugly. Heat the suet or other beef fat over medium heat until it starts to melt, then season the meat with salt and pepper and put it in the pot. Put the grated carrot, chopped parsley and onion in the pot alongside the meat and brown the meat slowly on all sides, turning the onion and stirring the parsley and carrot around as the meat browns. When the meat is well browned and the vegetables have softened, add the large can of tomatoes (mash up the tomatoes if they’re whole) and the tomato paste/puree. Season with salt and pepper if necessary, bring to a boil, then partially cover and simmer on low heat for about 2 hours, until the meat is cooked and the sauce is thick and rich. Taste for seasoning again.

When the sauce and meat are ready, cook and drain the pasta, then stir some sauce into the cooked pasta. Serve the pasta with extra sauce, along with the sliced meat and onion on the side.

This recipe can obviously be scaled up infinitely (just use more of everything—exact amounts are not critical here), and like most tomato-based dishes, it tastes even better leftover. The meat and sauce freeze very well, so you could make it in advance if you want. You could also serve the pasta and sauce one night and use the meat for another meal. The sliced meat also makes a delicious sandwich on a baguette, with extra tomato sauce and cheese melted on top. 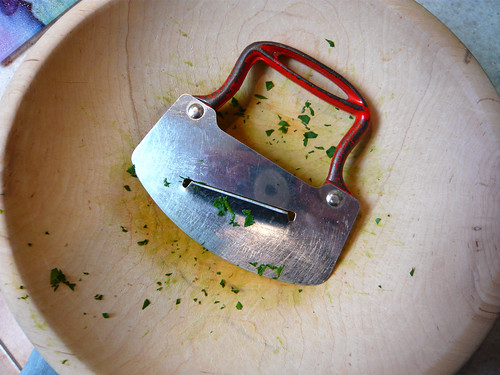 Lovely Jessica. And what is a bit surprising is that Oma was Irish and German and had to go to a neighbor lady if she wanted ever wanted a little taste of the spaghetti and meatballs the lady would make on occasion. She was the only one in her entire family that even liked Italian food. Opa would only eat one or two “Italian” dishes. As you know, I always thought that “tookoo” was a make-up name! So, a lovely rememberance for Oma...

Jessica, I got up this morning and started to make my grandfather’s ham perlo. Just for kicks I thought I would look on the internet to see if there was any other perlo recipes. Imagine my surprise when I found yours. The reason is my grandfather’s is from St. Augustine also. His family settled in Dupont Center. His name was George E. Dupont. He was the the of Cornelius Dupont. His mother was Lenora Carter. Who was your grandfather and father. Just want to know if we are somehow related.