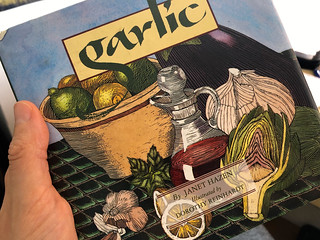 Spaghetti puttanesca has been a go-to meal in our house for many moons. One of the first building blocks of my now out-of-control cookbook collection was a small volume entitled simply Garlic, written by Janet Hazen and published in 1992. It has recipes for foods that were a mystery to me at the time (skordalia? salsa verde?), recipes that seemed wildly extravagant at the time (whole snapper? Thai sweet-hot duck?) and recipes that soon went into heavy rotation in our kitchen: beef stew with whole garlic and root vegetables, white bean and garlic salad, pasta shells in garlic cream sauce—and pasta puttanesca. 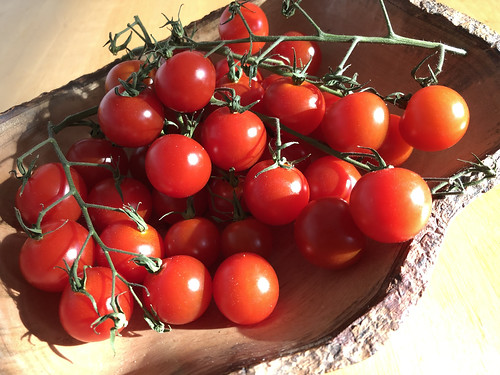 Like most classics, there are countless versions of puttanesca sauce, but the main elements are generally the same: tomatoes, garlic, anchovies, capers and olives. My little Garlic cookbook additionally uses onion, white wine, lots of dried herbs and, of course, lots of garlic (12 cloves!). This is the way Jeremy and I made puttanesca for years, even when we eventually stopped consulting the book and started throwing the sauce together by memory and feel (an amount of garlic, an amount of herbs, an amount of anchovies...). 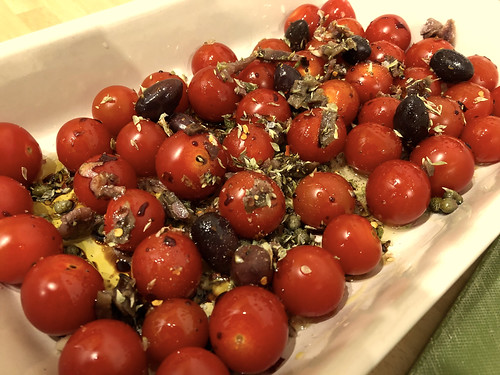 New pasta recipes have gradually overtaken puttanesca in our house, including a recipe Jeremy rustled up a while back consisting of cherry tomatoes roasted in the oven with lots of garlic and olive oil. It’s a low-maintenance recipe that basically entails turning on the oven and walking away. Then at some point last year I had a glut of cherry tomatoes and a craving for an umami-rich spaghetti sauce, and lo, oven puttanesca was born. 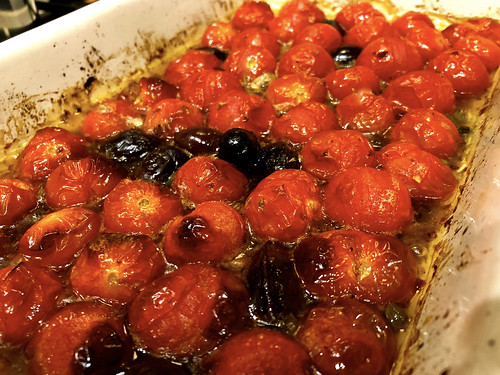 There is no technique involved here: you chuck a bunch of stuff into an oven dish, cook it for about half an hour and then mix it with some pasta (we use spaghetti, but anything would work). You can measure the amounts of ingredients, but you certainly don’t have to. Don’t like anchovies? Leave ”˜em out (but you’ll probably want to add salt). Love fiery foods? Add more chili. Out of oregano? Eh, whatever. Honestly, the key ingredients are fresh tomatoes (small ones work best, and they don’t even have to be top quality) and olive oil. When the oil-coated tomatoes break down in the dry heat of the oven, they become jammy and sticky, turning into a magical, no-effort pasta sauce—the best kind.

Mix everything but the pasta in a baking dish or roasting tin large enough for the tomatoes to sit in one layer. Cook in the oven for about half an hour, stirring once or twice, until the tomatoes have collapsed and everything is sizzly and juicy. When the tomatoes are cooked, you can turn off the oven and let the sauce sit in there until your pasta is ready.

While the tomato sauce is cooking, bring a pot of water the boil for the pasta. Cook the pasta until it’s just slightly underdone, then drain it, return it to the pot and pour the tomato sauce over it. Give it a good stir so that the tomatoes break down even more and the rich juices coat every strand of pasta. 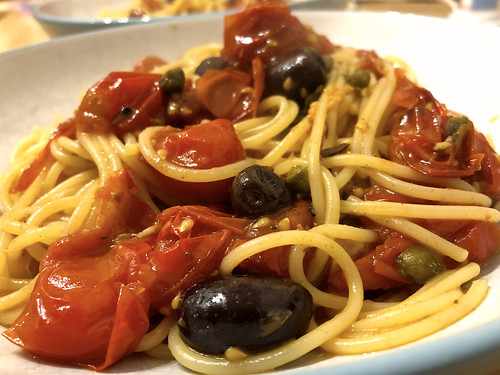 So glad to see you post again. I’ve been making a version of your Carbonnade í  la flamande for years and always enjoy reading your recipes.

Thank you, Roger! Yeah, four years is a long time between posts - I’m going to try not to let that happen again! ;-)