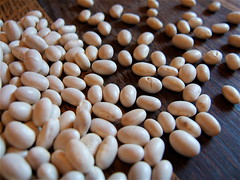 Nothing beats a steamy bowl of bean soup on a cold winter’s day. There is certainly great satisfaction to be found in soaking your own beans and making the type of soup that needs to simmer away on the stovetop for hours before it’s ready to eat.

But what if you don’t have the time or energy to embark on a major soup-making project? Or what if you decide on the spur of the moment (as I generally do) that you want to have bean soup for lunch - right now?

In cases such as this, you can open up a tin of bean soup and chuck it in a pan, or you can open up a tin of beans and make your own quick and easy bean soup. The bean soup that I like to make is based on the “Bean Soup from Tuscany” recipe in a cookbook called The Feast of the Olive. There are countless recipes for “Tuscan bean soup”, but what makes this one stand out for me is the addition of lemon juice, which really brightens up the taste of the soup.

Heat the oil and bay leaves in a large pot over medium heat, then add the beans and toss to coat them in the oil. Add the oregano and enough broth to cover the beans. Simmer this for as long as you like - longer is better, but you can get away with just 15 minutes or so if you’re hungry. 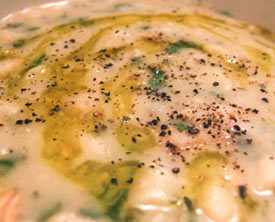 Either remove the bay leaves and puree the beans as much as you like, or just mash the beans up a bit with a spoon. Add the garlic, parsley and lemon juice and simmer for another 5-10 minutes. Season to taste with salt and pepper, then serve with more olive oil.

The nifty thing about this soup is its versatility. When it’s cold out, you can serve a giant bowl of it doused with olive oil, dusted with parmesan and accompanied by a big loaf of crusty, buttery bread; but when it’s warm out, you could serve a small cup of it as a starter, garnished with the lightest drizzle of fine olive oil and perhaps a tiny sliver of lemon and a sprig of bright parsley. Either way, leguminous pleasures await you.

Sounds loverly. Must try it out.

It sounds like my "instant" cassoulet recipe except it lacks the cheap scraps of meat and sausage I throw in, but I think I may switch over to this version as I feel I am slipping down the slippery carnivore route having managed to abstain for some time. The lemon and parsley are an inspiration, but I may continue to add the odd onion, white or red.

Strictly speaking, I think stock is more concentrated than broth. But I tend to use "stock" and "broth" interchangeably to mean any sort of bouillon-type liquid that’s used as the basis for a soup, stew, sauce, etc. My default broth/stock is Marigold Swiss Vegetable Bouillon (http://www.marigold-health-foods.com.au/home_page.htm) - it’s not as good as making your own stock, but it does the trick.

Ethan (Sidesh0w) came back from SXSW with a wicked cold, which he then passed along to me. This bean soup got us through the worst days of it, and was easy enough to make even while loopy on cold medicine. Perfect food for cold Cambridge (MA) winter day!

Love your writing, and I look forward to making more of these recipes.

That’s the best possible endorsement of this recipe - I’m so glad you enjoyed the soup and the site!

OH MY……this is YUM YUM YUMMY soup! I agree with the idea of the lemon juice giving it a wonderful zest! If I closed my eyes, I could picture myself sitting on the patio of a stucco in a chilly wrought iron leaf bistro chair being cooled by a wheat-laden breeze as I sipped this soup from a crock mug. I mixed up a mash of green pimento pitted olives, minced garlic and sweet margarine which I spread over warm, crusty Italian loaf. What a wonderful way to spend a snow storm in the WV hills!

Hey there! I am excited to try this recipe, and I love the reviews!!! It’s Sunday, and my "veggie" daughter and family are coming out to the country to visit. Watch the esteemed twinkle in her eye as she admires her mother for attempting yet another meatless dish…the mom who already bakes bread, buns, etc., with only whole wheat flour, is well used to using everything from quinoa to tofu…Well, off to make that crusty loaf of Italian to accompany this beautiful soup! Thanks again!

Wonderful and super easy, taught my completely non-food saavy boyfriend another dish, and was ready in about 15 minutes. In my haste to eat the (amazingly creamy) soup, I did forget the lemons and parsley, but it was still delicious. I could definitely see myself adding onions and fresh mushrooms, or doubling the batch because it was a scant four bowls. Thanks for the recipe, always looking for ways to add protein.

This is fantastic - so clean, so fresh, so satisfying! Thanks for the recipe!

This soup is so tasty and easy to make! My family loved it thanks