Oh mustard, how do I love thee? Let me count the ways: wholegrain, Dijon, English, German, Creole, spicy, sweet, with honey, with horseradish, with beer, with wine... 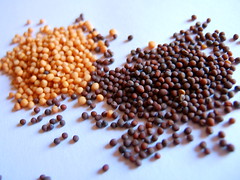 It’s fair to say that I have a bit of a mustard obsession. But how could you fail to admire such an ancient and noble food? Prepared mustard may have been used for culinary purposes as far back as Roman times—but it was when the Romans brought mustard paste to Gaul that the condiment really took off in Europe.

Mustard was big business by the Middle Ages, and in the 14th century a pope in Avignon went so far as to appoint his own moutardier. The 18th century saw the establishment of big-name mustard-makers like Maille and Grey Poupon, while the 19th century brought us Colman’s in England, Hengstenberg in Germany, and Gulden’s in the USA. Though Dijon had long been a center of mustard-making, Dijon-style mustard as we know it was also first created in the 19th century, thus cementing the city’s well-earned place in the annals of mustard history. 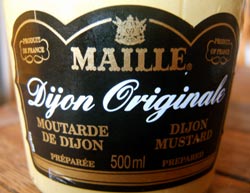 The popularity of mustard hasn’t waned, and it’s easy to see why: from bright yellow French’s squeezed over a hot dog to zippy Dijon in a sophisticated vinaigrette, mustard complements the most disparate foods and adds panache to everything it touches. It is the king of condiments in my house, and barely a day goes by that I don’t break out one of the many types of mustard I have for one dish or another.

The most obvious use for mustard is on a sandwich. A straightforward ham and cheese sandwich with mustard on good dark bread is absolutely divine. But if you feel like getting a bit more adventurous, you could try “The Natural”, a sandwich I used to order frequently at the Tailgate Picnic deli when I was in college. My version of the Natural involves mixing equal parts honey and spicy mustard and spreading it on a fresh baguette, then layering on slices of ham, smoked turkey or cheddar cheese (or any combination of the above), tart apples and slivers of onion. I generally drizzle even more honey mustard over the top, just to make it extra slippery and difficult to eat. 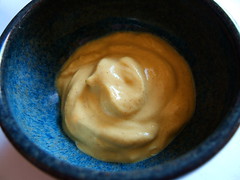 Honey mustard also makes an excellent glaze for salmon or pork: just mix equal parts wholegrain mustard and honey and spread it on salmon filets or pork chops before grilling/broiling them. Mustard without the honey is good for beef and lamb. I recently prepared a small roast beef the same way I do my roast pork, but after searing the beef, I seasoned it with coarse salt and pepper and then slathered it with Dijon mustard before roasting. A paste made of crushed garlic, rosemary, Dijon mustard and olive oil is also delicious when spread on lamb or beef before roasting. In any case, as John Oxton has pointed out, mustard goes very mild when it’s cooked, so you can be very generous with it if you’re spreading it on meat that’s to be roasted. 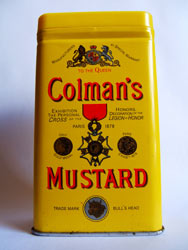 The Germans certainly love mustard, and I have a very tasty, easy German recipe for pork in mustard sauce that I’ve been making for years. You can use pork medallions or boneless chops for this, and any kind of mustard you like; I use a mixture of wholegrain (for the texture) and Dijon (for the bite). Season your chops with salt and pepper and coat them lightly with mustard, then fry them in a bit of butter and/or oil in a medium-hot pan until they’re done to your liking. Take them out of the pan and keep them warm. Sauté a finely chopped shallot or two in the fat that’s left in the pan, then de-glaze the pan with a splash of white wine and add a small pot (125g) of whipping cream. Simmer the cream until it’s reduced by about half, then stir in a few tablespoons of mustard and a small chopped pickle/gherkin. Season the sauce with salt, pepper and a pinch of sugar and serve it with your chops and a big pile of Spätzle. This clearly is not for people on a diet - but it’s worth every calorie.

Mustard isn’t just for meat, of course. Mustard and cheese—hot or cold—is a match made in heaven. A mustard-cheese sauce works wonders for cauliflower or broccoli. Or you could buy your cheese with the mustard already in it and just eat it as is. Mustard livens up lentils, and a big dollop of wholegrain mustard gives a nice kick to mashed potatoes as well. 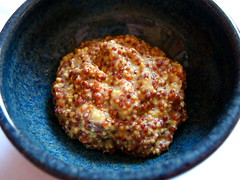 But the vegetable I’ve found to benefit the most from mustard is the under-appreciated Brussels sprout. For the best Brussels sprouts ever, cook your Brussels sprouts in salted boiling water until they’re just tender, then drain them. In a frying pan, sauté a thinly sliced onion or shallot in butter, olive oil or a combination of the two until soft and golden (you can sprinkle a bit of sugar over the onion for a more caramelized effect). Add a few hefty dollops of wholegrain mustard (depending on how many Brussels sprouts you have and how much you love mustard). Throw in the Brussels sprouts, stir everything around and heat it all through, then season to taste with salt and pepper. Even people who ostensibly don’t like Brussels sprouts have been known to like these Brussels sprouts. This recipe certainly made me a convert.

And, of course, you can’t mention mustard without mentioning vinaigrette. A good French vinaigrette demands Dijon mustard. My favorite French vinaigrette recipe is from Epicurious; it’s very simple and it’s got the perfect proportions of oil, vinegar and mustard for a delicate salad. If I’m making a salad that includes watery vegetables like tomatoes and cucumbers, I generally add a bit more mustard so the dressing asserts itself more. But for a plain green salad, the recipe is great just as it is—though the key to its beauty is to use good quality extra-virgin olive oil and good quality greens. 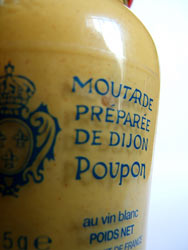 There are still some corners of the mustard world that I have not yet explored. For example, I haven’t tried to make my own mustard, though I certainly want to attempt it at some point. I also haven’t had the pleasure of visiting either the Mustard Museum of Mount Horeb, Wisconsin or the Colman’s Mustard Shop and museum in Norwich, but if the opportunity arises, I’ll go in a heartbeat. I would approach things like mustard ice cream or Key Lime Mustard Chocolate Truffles with somewhat more trepidation—though given my love of all things mustardy, I wouldn’t rule out the possibility of really enjoying such a strange-sounding combination. But until I get the chance to try some of the more daring uses for mustard, I’ll happily stick with the tried and true: a dab of Colman’s on a piece of ham, a dash of wholegrain with some green vegetables, a dollop of Dijon with just about anything—and a promise of tongue-tingling delight. 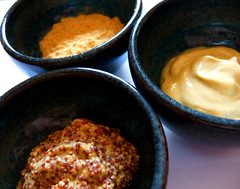 Mmmm I had bangers and mustard mash only last night. The mustard sprouts sounds intriguing - I’ll try to remember that for next winter when Brussels start appearing in the box again.

Obviously there are heaps of uses for mustard and you couldn’t mention them all here, but my fave use has to be in Caesar dressing which uses plenty of Colman’s mustard powder, at least in Delia’s recipe (see http://tinyurl.com/eptka).

I’ll have to try that Delia recipe, seeing as I’ve never been pleased with the way my Caesar salad turns out. Mmm, Caesar salad…

I actually don’t like mustard. (Except for Dijon). I guess I don’t find many uses for it every day I eat. Infact I do eat ketchup on alot of things though.

I guess it’s a matter of preference wether you like it or not.

Aside, This blog is truly great. Never would have guessed you had a food blog. It’s hittin’ up the old RSS list for sure.

I love Mustard so much! My least favorite is the sweeter mustards, honey and stuff. But I am going to try it again with some of your ideas. I stick my finger in the jar of Dijon, squirt gudens or good ole frenches right on my finger and am in heaven.
Holly

Oh my word, this page is like my homecoming, a revelation! I am a huge fan of the mustard and have been preaching to those less fortunate in understanding, meatball sandwiches with dijon or english, or mustard on anything, mustard and jam sandwich is nice too.

Hmm, I’m not so sure about mustard and jam - but then, I’m a big fan of peanut butter, jam and cheddar cheese, so I’m not one to talk! :-)

for something different, and very tasty, I have loved this since a child: Hot chrispy bread roll with sliced banana, cheese, mayo & french mustard. sounds terrible till you try it. Use good white bread roll and all the ingredients and warm/ chrisp the roll in a hot oven for 10 minutes.

What kind of Cheese are you thinking of, Mick?

Mustard is revolting, I don’t know how people can stand to eat that vile yellow stuff.

Thanks for the tip - had Udon there yesterday and it was great.