The Garden of Earthy Delights 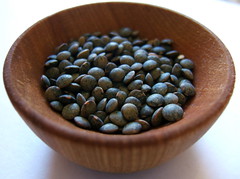 Whenever Jeremy is away and I’m cooking for myself alone, I wind up making lentils. Perhaps it’s because they’re the ultimate comfort food, right up there with mashed potatoes or cream of tomato soup or anything else you can eat out of a big bowl with a spoon while curled up in front of the TV on your own.

Lentils are often dismissed as being muddy, frumpy “hippie food”. While this reputation is not entirely undeserved, there is so much more to these lovely legumes than the endless vats of uninteresting vegetarian sludge cooked up in college cafeterias might lead you to believe. Lentils have a gorgeous earthiness, but that earthiness needs to be paired with something zesty in order for a lentil dish to really come to life. A perfect example of this can be found in Indian cooking, where red lentils and other legumes are perked up with garlic, ginger, chilies and spices like cumin, coriander and turmeric. And the Germans have figured out that the pedestrian brown lentil benefits enormously from the addition of some salty bacon or smoky sausage, making just the type of soup you want to eat on a bitterly cold winter day. When you’re cooking lentils, you want to think salt, spices, garlic, vinegar, mustard - things that add zing.

My favorite lentil is the shiny green Puy lentil from France, and one of my favorite ways of preparing Puy lentils comes from a book called Olives: Cooking with Olives and their Oils by Ford Rogers (which is, incidentally, a really nice cookbook all around). The recipe is called “Lentils with Alphonso Olive Rouille”, and I was delighted to find it online. The lentils are prepared very simply; it’s the spicy, garlicky rouille that really makes the dish “pop”, as they say.

It’s a fast and easy recipe that you can usually make just with the ingredients you have on hand. I often substitute onion and garlic for the shallots, and I tend to forgo the bouquet garni in favor of some bay leaves and (gasp!) dried oregano. I make the rouille with Kalamata olives and Tabasco, and I always make more than I’ll need for the lentils because I like to use it as a tapenade to spread on bread. It may not be haute cuisine, but a big bowl of these lentils always seems to put me right.

But lentils are not just a comforting main dish on solitary nights. Puy lentils in particular also make a sophisticated side dish for any number of meals. Due South restaurant in Brighton makes a gorgeous lentil salad which is not too dissimilar to this recipe at Epicurious (the ham and bacon in the recipe are extraneous - by sauteing the onions in olive oil and cooking the lentils in vegetable stock instead of water, you’ll have the perfect hearty vegetarian salad to be served warm or cold). Williams Sonoma has a similar recipe for warm lentils in vinaigrette, as well as a tasty spiced lentil recipe to be served with salmon or whatever else takes your fancy. There’s a strong affinity between lentils and feta or goat’s cheese as well (it’s the salty, tangy thing), and a salad made with Puy lentils, feta, red onion, mint, olive oil and lemon juice makes a perfect lunch on a warm day.

So you see, the much-maligned lentil is not only a cheap and healthy food, it’s also a versatile and tasty one. Lentils can be as frumpy or as fancy as you want them to be. Dressed up or dressed down, they’ll fill your tummy and soothe your soul. And if that’s not enough, no less a man than the great Umberto Eco claims that lentils may have helped pull Europe out of the Dark Ages and into a blossoming new state of civilization. Maybe the humble lentil isn’t so humble after all.

yummy….you guys should have a restaurant!

I dream about that sometimes - a cozy little cafe/bistro-type place with a small menu that changes regularly, a friendly atmosphere, nice wines, not too expensive… But when I remember all the work that’s involved in actually owning an eating establishment, I start to think that maybe I’m better off going to other people’s cozy bistros than owning my own!

Great article, Jessica, you’re spot on about lentils just needing a bit of zing to bring out their flavour: mint, vinegar, ginger, chilli, whatever. Puy is my favourite, too, but I’m getting back into red after much neglect, it’s got such a comforting taste especially when it’s cold out.

Mmm, yes, red lentils are lovely, and they cook so fast, too.

For years, I’ve been making the Moroccan Lentil Stew from the "All Recipes" site: http://soup.allrecipes.com/az/MoroccanLentilSoup.asp It’s a really nice red lentil-based stew with cardamom, cumin and garam masala. It cooks much faster than the 1 1/2 hours cited in the recipe, and it turns out much thicker and creamier than it looks in the picture on the All Recipes site (at least, it does when I make it!). I recommended using vegetable broth instead of water and maybe adding a dash of tomato paste to get a bit more depth of flavor. Serve it with a dollop of yogurt and/or a sprinkling of feta cheese. Delicious!

I can’t let a post on lentils go by without mentioning Indian food, or rather the kind of Indian food we most often get in this country.

And really couldn’t let a comment on Indian food and lentils go by without mentioning ‘my’ recipes for dhansak[1] and dhal[2]. Yum, though I say so myself.

Excellent - dhansak and dhal are my two favorite (Anglo-)Indian foods. I could eat a trough of dhal.

THIS is the program for you two delightful sounding individuals - this course was MADE for people like you :)

Lentils are a fantastic and filling food. I find a really good accompaniment to curries or spicy middle-eastern foods is a simple combination of red lentils, rice and garlic (all cooked together). It’s warm, comforting and filling.

Alas, Puy lentils are hard to find in Brisbane (Australia), so although I have several interesting recipes that use them, I’ve had to substitute brown or red lentils (and judging by their different flavours, probably nowhere near the same as Puy).

I just got into lentils recently. I never really liked them as a child. My boyfriend and I like to make lentil soup with bacon. We even add a bit of feta cheese right before serving, which I thought would be gross but to my surprise pretty tasty.