Imagine a Michelin-starred restaurant where the diners all sit together at a long communal table in the kitchen, the food is cooked right in front of you, and when someone comments on how delicious the perfectly pink duck breast is, the chef passes around a plate with extra duck in case anybody wants a second helping—or even a third. 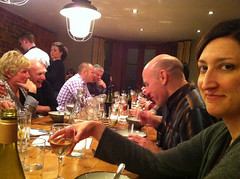 This is what it’s like to dine at the pop-up supper club in Brighton run by chef Chris Bailey. Bailey earned a Michelin star at a pub in Winchester, but now he’s brought his gorgeous local and seasonal cooking to Brighton in the form of intimate, one-off dining experiences known as the Interim Table.

When Jeremy and I were tipped off about the existence of the Interim Table, we immediately snapped up two tickets for the next event. And so, on a blustery Saturday night, we found ourselves in the gleaming basement kitchen of a classic Brighton house, knocking back sloe gin cocktails with (mostly) complete strangers to whet our appetite for a ten-course tasting menu prepared just for us.

I was excited but also somewhat apprehensive about the supper club experience—excited by the idea of the food and the “secret society” atmosphere, but nervous at the thought of having to commune with strangers over dinner (I’m not a big “communer”). 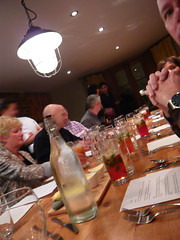 There was no need to worry, though; from the moment we were welcomed at the door by the smiling chef himself, we knew we were in for a fun, relaxed evening. As our fellow diners (including the chef’s parents) tumbled into the room and took their seats around the massive oak table, there was lots of friendly chit-chat which only grew more exuberant as the evening went on (helped, no doubt, by the aforementioned cocktails and the well-chosen selection of wines on offer).

The menu for the evening started with three taster-sized morsels: a curl of puffy pork rind topped with smoky cod roe, a tender scallop with corn puree and a cube of sherry vinegar gel, and a silky chicken liver parfait on a square of sticky-sweet malt loaf. We were then treated to warm sourdough bread and a choice of freshly churned salted butter or butter blended with pork fat (yes, this is actually a thing—a delicious, heart-attack-inducing thing). 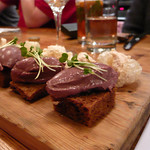 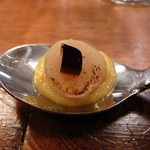 With our palates primed, we tucked into a celeriac soup cradling a tiny quail Scotch egg with an oozing golden yolk and a crispy salt cod coating. The hints of smoked paprika and cumin in the egg were a toasty counterpoint to the creamy soup, and one of my friendly dining companions chuckled as a scraped every last morsel from my bowl. “Didn’t like it, eh?” Nope—I loved it. 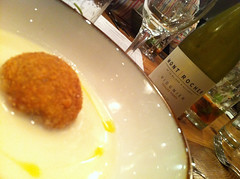 Up next was a succulent pork terrine surrounded by dill pickles and roasted beets. The pork terrine was the best I’ve had (tender, moist and flavorful), but it was the pickles that really had me swooning. I could eat a jar of dill pickles by myself in one sitting, but the pickles I love most—properly salty, garlicky kosher dills—are practically impossible to come by in Brighton. These pickles were closest I’ve had, and I enjoyed them so much that it took all of my willpower not to ask a fellow diner if I could have the pickles he had left on the side of his plate. 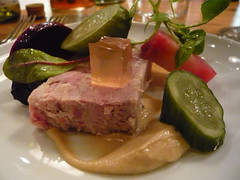 After these dishes, things got smoky in the kitchen as we moved to the main courses: chargrilled trout and seared wild duck breast. The trout, served with black olive gnocchi, was soft and scrumptious, but again, the real revelation came in the form of something accompanying it: locally foraged alexander shoots. 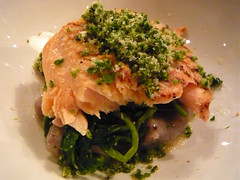 I’d never eaten or even heard of alexanders before, so this dish was particularly exciting. The alexanders tasted kind of like parsley and kind of celery and not really like either one, and as they soaked up the buttery preserved lemon emulsion that was drizzled over the dish, they became more and more irresistible. I scraped this plate clean, too.

The highlight of the meal, I think, was the wild duck breast accompanied by a quince and tonka bean puree, with ebony trompette mushrooms and a pleasantly chewy wheat berry pilaf. I’d never tasted tonka bean before, either—and now that I have tasted it, I am well and truly addicted. 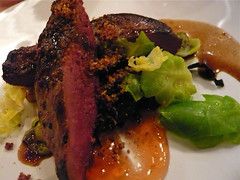 As mentioned earlier, the duck breast was cooked to rosy perfection. It was also garnished with a crumble of crispy duck skin and brioche, and these savory, meaty flavors were complemented beautifully by the sweet puree. The taste and aroma of the tonka bean was vivid and elusive at the same time. It was like vanilla, and almonds, and winter spices—basically, it was like Christmas on a plate (another very cleanly scraped plate). And when those extra duck breasts got passed around, even though I was already stuffed I couldn’t resist having a bite more.

There was one more savory course to come: a plate of gooey Vacherin Mont-d’Or with walnut bread toasts and a red wine and apple puree. The sweet, creamy cheese was luscious (I took a second helping of that, too), and it was a good bridge to the dessert that followed it: toffee sponge cake with macadamia granola, a tart cider foam and unctuous clotted cream. This was washed down nicely by the third revelation of the night, namely, a Malbec dessert wine (the apple brandy that was being passed around went rather nicely as well). 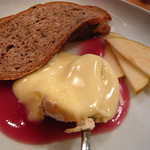 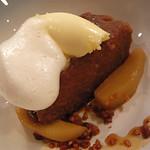 At this point, the wine was flowing freely as freely as the conversation (or vice versa), laughter reverberated through the room, and I was so full that I just managed to devour one last sparkly chocolate truffle, a chunk of shortbread and a chestnut and cinnamon macaroon before slumping over in exhausted contentment. 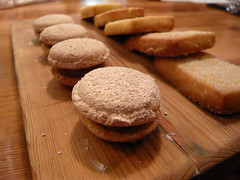 The Interim Table evening was a pure delight. It was wonderful to share outstanding food with like-minded diners in such a laid-back context. In terms of atmosphere, it was less like a restaurant and more like a great dinner party where you just happen to not know anyone. Culinarily, it was some of the best food I’ve had in Brighton. And as far as the supper club experience goes—I’m a convert. 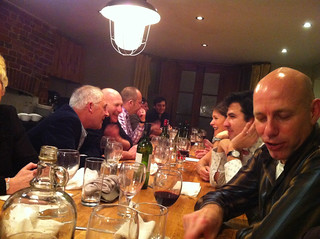 Jessica, I couldn’t have put it better myself. I thoroughly enjoyed Chris’s cooking, the highlights for me being celeriac velouté; black olive gnocchi; tonka bean purée. Some of the best food I’ve had in Brighton? absolutely.