Back in 2009, I came across a recipe for chicken and lentils (Poulet aux Lentilles) on a food blog called Blue Kitchen. The path that originally took to me to the site is lost in the mists of time, but the recipe has lived on in my house, scribbled awkwardly on the back of a small page torn from a 2008 desktop calendar. 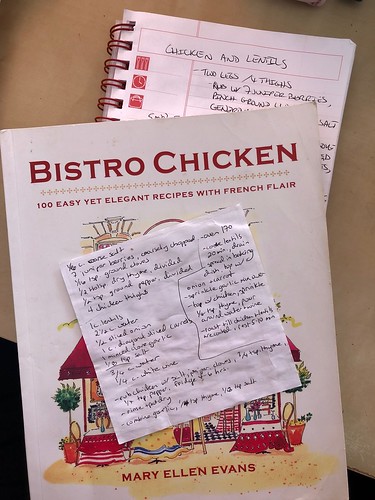 The recipe piqued my interest with its combination of juniper and cloves on the chicken, somewhat unusual flavors to which I’m always drawn. I’m also not one to ever pass up puy lentils, so this cozy, one(ish)-pot bistro dish went into regular rotation for dinner. I was so convinced of its broad appeal that in 2011 I scaled it up to feed 13 people at a retreat for Jeremy’s company (it’s what I’m preparing in this picture). It converted one person to liking lentils and prompted several others to ask for the recipe, so my instincts weren’t wrong. And a year later I finally bought a second-hand copy of Bistro Chicken: 100 Easy Yet Elegant Recipes with French Flair, the cookbook from which the online recipe was adapted—only to realize that the Blue Kitchen adaptation was superior to the original.

Even with improvements, however, aspects of the recipe still seemed unnecessarily fiddly. Pre-cooking the lentils in a separate pot not only dirtied another dish, it also risked the lentils being overcooked at the end of the baking period. Scattering raw onions and carrots over the lentils before baking posed the opposite risk, namely, that they’d still be slightly crunchy when the chicken was done. And not pre-browning the chicken often resulted in chicken skin that was still sadly flabby by the time everything else was ready. Also, lentils with no bay leaf? No way. 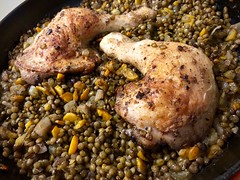 Enter my beloved 28-cm cast-iron skillet and my plan to turn this already delicious recipe into a more streamlined, foolproof and truly one-pot dish. The basic ingredients are the same, though they appear in different forms. I’ve added a few things (celery, the above-mentioned bay leaf) and swapped a few things (chicken stock instead of water, though water will do in a pinch), but the spirit of the recipe and the flavors I first fell in love with are very much intact.

When I cooked this chicken the other night, I was struck by its resemblance to the popular combination of duck confit and lentils, and I realized (very belatedly) that this is exactly what the recipe is going for. The aromatic salt rub infuses the chicken, the lentils are enriched by the traditional trio of onion, celery and carrot, and together they produce a meal that is simple, rustic and deeply satisfying.

For two people (who like a lot of lentils!) you’ll need:

If you’re cooking straight away, preheat the oven to 175C/350F. If you’re going to let the chicken sit in its salt rub for a while, hold off on the oven until you’re ready to cook. 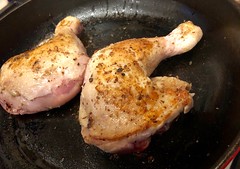 Combine the crushed juniper berries, cloves, salt, pepper and optional herb in a small bowl and rub the mixture all over the chicken pieces. Set the chicken aside for as long as you can manage—longer is better (e.g., a few hours in a covered container in the fridge) because the salt and spices will penetrate more, but if you don’t have time, don’t fret, just get cooking (turn on the oven!).

In a deep oven-proof skillet or Dutch oven/cast-iron casserole dish, heat a splash of olive oil over medium-high heat and brown the chicken for a few minutes on each side (it just needs to take on some color, it doesn’t need to be brown-brown). Remove the chicken and set it aside. 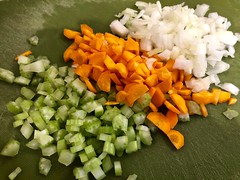 In the same pan—adding another splash of oil and lowering the heat if necessary—saute the onion, carrot and celery for about five minutes, until they’ve also just started to soften. Throw in the chopped garlic and bay leaf and stir for 30 seconds or so, then douse the vegetables with the wine and let it reduce for 2 to 3 minutes. 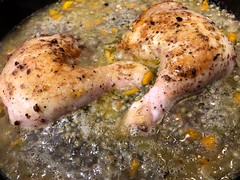 Once everything is done, remove the pan from the oven. You can serve it family-style in its cooking pot or you can dish it up into separate bowls. In any case, sprinkle the finished dish with the red-wine vinegar (for some welcome acidity), the parsely (for color—this dish is tasty but rather monochrome, as you can see below) and a drizzle of extra-virgin olive oil (because why not?). Then sit down at the table with an easy-drinking red wine and a crisp green salad and enjoy the French bistro vibe! 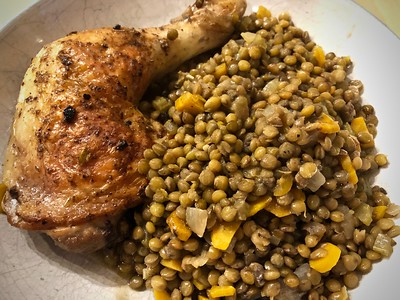