Let’s get this out of the way: this recipe bears no resemblance to either proper Italian risotto or Spanish paella. Though it has elements of each of those dishes (arborio rice, chorizo), it is very much its own hybrid, non-culturally-specific thing. But it’s also very enjoyable, so don’t let its non-specificity put you off. 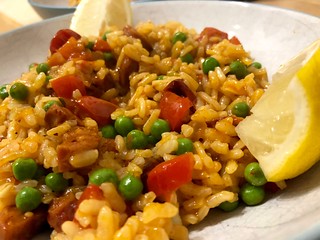 The genesis for this dish was a recipe for baked chicken, prawn and chorizo rice that was recommended by a friend a very long time ago. Through my years of cooking it, the recipe has morphed into something clearly related to the original and yet different enough to merit its own post here. We’ve been eating it about once a week for much of this pandemic year (with some time off in the summer when it was too hot to contemplate turning on the oven), because it’s fast and easy and delicious and comforting and we almost always have the ingredients sitting around in the fridge. 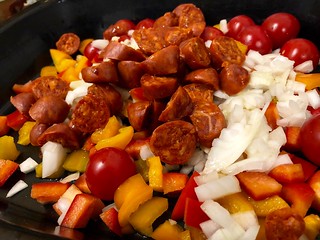 This is another “throw everything in a tray and let it cook” sort of meal, and there’s no trick to it, but let me mention a few things about the ingredients. First, you want to use Spanish chorizo, not Mexican chorizo (which is a different but equally delicious thing). I tend to use softer cooking chorizo rather than the firmer ready-to-eat chorizo, but use whatever you have available. If you can’t find cherry tomatoes, just cut up some bigger tomatoes. I generally go for arborio rice, which is a typical short-grain risotto rice, but I’ve also used bomba paella rice in the past and it works well too (though it’s not quite as creamy). And I never actually measure out the peas, I just thaw “an amount” in the microwave while everything else is cooking and stir them in at the end. They’re not essential, but they’re good for a pop of color and sweetness.

Put the tomatoes, onion, peppers, garlic, chorizo and olive oil in a roasting tray and cook for 20 minutes, until the vegetables have softened and the chorizo has started to brown.

Stir in the rice, rosemary, paprika and stock and return the tray to the oven for another 20 minutes, until the stock has been absorbed and the rice is tender but still has a bit of bite. Stir in the green peas and season if necessary. Serve the rice with lemon wedges to squeeze over.

I can testify that this is as just good eaten properly at the dining room table with a green salad and a fruity Spanish wine as it is eaten from tray tables in front of the TV after a long, stressful day.